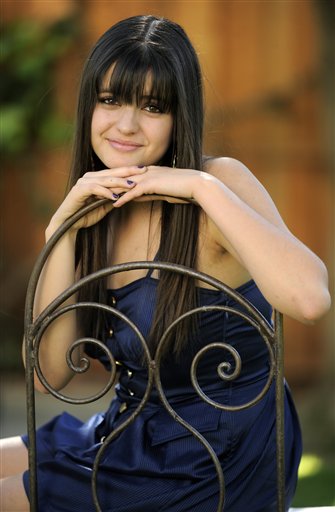 Rebecca Black has become the subject of even more skepticism and making headlines because of a ridiculous rumor. Different press has tried saying that the 13-year-old ‘Friday’ singer is pregnant! Black countered these rumors by tweeting Sunday, “I thought it was May 15th … not April Fool’s Day. I’m absolutely NOT pregnant.”

The rumor caught fire over the weekend and was traced as a web-generated hoax. The rumor spread like wildfire through different blogs and posts. This spread very similar to her so-bad-it’s0-good video for ‘Friday’ which has received over 140,000,000 views on YouTube. CNN iReport posted the rumor as though it were true! Since Black confirmed that the rumors simply weren’t true, CNN has taken down the post.

Supposedly Black’s friend is to blame for the rumor. Her friend posted a comment on Facebook page about Rebecca being pregnant and it spread stunningly fast, even though the comment was soon removed. It was rumored that Nat Wolff, Black’s boyfriend of one year, was the father. People quickly jumped to conclusions and deemed Black an awful role model. Hopefully this rumor will blow over and Black will return to being known as the girl with the terribly catchy song that annoyed the world.

Spy Kids 4: All the Time in the World

Rebecca Black Is Working On A Debut Album