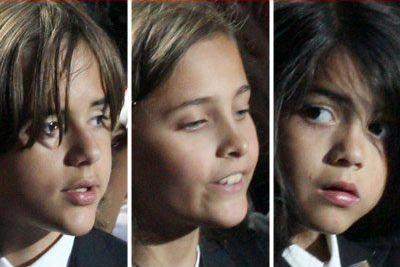 Although their father was one of the most famous people in the world, and arguably the most successful person in show business, his children, Paris, 12, Prince, 14, and nine-year-old Blanket do not demonstrate their dad’s keen talent and interest in show biz.  Although they have been attending regular after-school acting classes they appear thoroughly bored by them.

The trio, who have been living a more normal life since the death of their father in 2009 had said in February that they had fancied following him into show business too.

Talking to Good Morning America in February, Paris said that she was thinking of auditioning for a play, though it is not known whether or not she was successful.  Prince however was a bit more vague about his career aspirations, saying simply:  ‘continue what our dad was doing.’

The children are cared for by the Jackson clan matriarch Katherine, 80, who is trying to ensure they have a normal life as possible which amongst other things means going to school for the first time.

The children are certainly looking well, with Blanket, aka Prince Michael II, looking a lot different from the little boy the world saw on stage at Michael’s memorial in July 2009.

Paris is also looking more and more like her mother Debbie Rowe, with her angular jaw and bright blue eyes.  And 14-year-old Prince Michael looks quite the young man as he looks down grinning as him mobile.  Their aunt La Toya, 54, is also playing a large part in their upbringing and said that they are thriving.

She said: ‘They have gone to school and they really like it, so I’m very happy for them. It’s taught them something totally different about people and life.  They’re just enjoying themselves.’