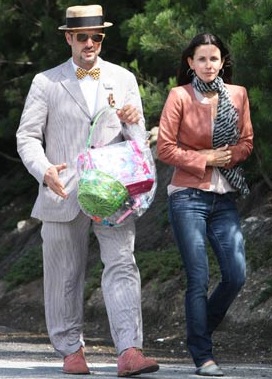 David Arquette and Courteney Cox spent Easter together with their daughter six months after the actors agreed to a trial separation. Courteney recently described her and David as an “odd pairing” – and they certainly looked very different yesterday.

“I love her relationship with Dewey and the fact that they’re together is so funny.”  “He’s so earnest and she’s so out to get ahead.”  “It’s just a very odd pairing and so were we.”

Their break-up in October prompted David to go off the rails as he turned to the bottle and strippers – later admitting he’d suffered a ‘nervous breakdown.’   Courteney recently spent a week in St. Barts with her Cougar Town co-star Josh Hopkins, confirming speculation of a romance between the two.

Mariah Carey Paints Her Pregnant Belly Like An Easter Egg