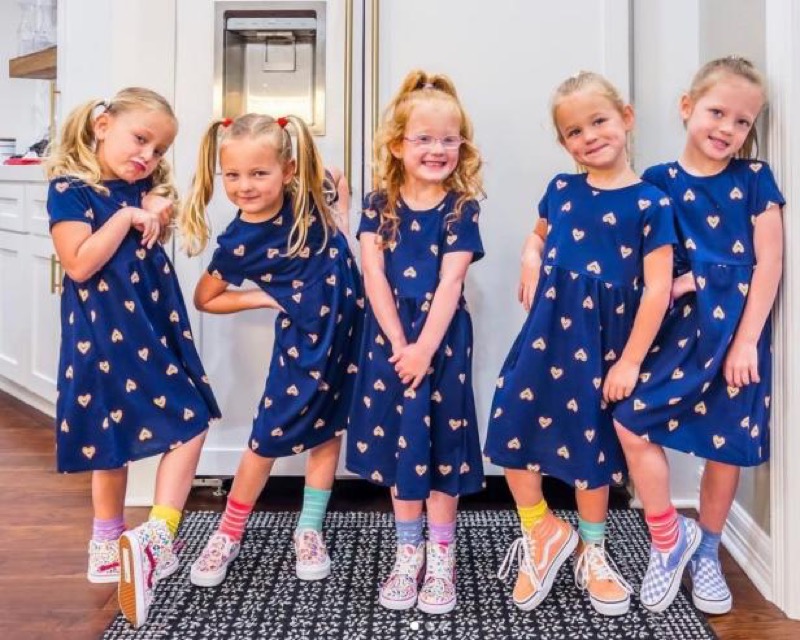 OutDaughtered spoilers from previous years revealed that the favorite season of all for Adam Busby is Halloween. In the past, the quints were terrified by his scary costumes. Not to mention Beaux the dog. But these days, they no longer scare so easily. So, they had a blast trick or treating until it all went wrong.

Before TLC put the show on hiatus, fans saw that the kids finally stopped being so scared. Actually, last year, Adam tried to go all out. Recall, the previous scary season was a bit of a letdown because of the coronavirus. So, the kids missed out on trick or treating. Anyway, he made some scary mazes at home and in a haunted house. Really, the only kid who seemed a bit afraid of it all was Hazel. But she wasn’t scared this year. In fact, she gorged on candy in the golf cart.

For some time, the OutDaughtered parents were not keen on being too spooky, given their Christian faith. So, when they did allow the kids to dress up, fans were amused by the twins who dressed up as friendly unicorns. This year, it was Blayke who dressed up and she lumbered around in a dino costume. But, it looked funny rather than terrifying. Before they hit the street to go trick or treating, the family tucked into some pizza, and Adam told the camera that they were doing the rounds for candy in their golf cart.

When Adam Busby shared his video of the quints and Blayke on Halloween, he had arranged for the golf cart, which saves on walking everywhere. However, the kids along with their cousins, and friends split up. So, briefly, they lost sight of some of them. Mind you, they were well lit up with ankle bracelets, so they soon spotted which houses they were at. Anyway, it seemed to be a bit of a competition and Parker Kate claimed she got the most candy. However, the golf cart broke down. So, they ended up having to punish it all the way home.

OutDaughtered fans saw that the kids all helped to push the cart back home. Actually, seven-year-olds, seemed very willing to help, despite the evening going wrong for them. In his caption for the video, Adam said, “This year, It died at the end of the night, and the quints [were] a Huge help getting it home!” Later, the kids all got themselves clean again, and as they sat on the big bed with Danielle, she brushed their hair. Actually, they looked all tuckered out after all the fun of Halloween.

OutDaughtered fans took to the comments section and chatted about the Busby quints. One fan wrote, “Oh man! Lot of sisters running for candies here & there 🥳😃 couldn’t even count how many princesses there…but it was so much fun. 😊 Happy Halloween to Busbys 🎃 . Parker talks just melt my heart 😍🥳 such a adorable child… Hazel is such a cutie 😊 God bless everyone 🙏.”

Another fan raved about the content that Adam posts on his It’s a Buzz World channel. For now, it’s good and makes up a little bit for not having a new season on TLC.