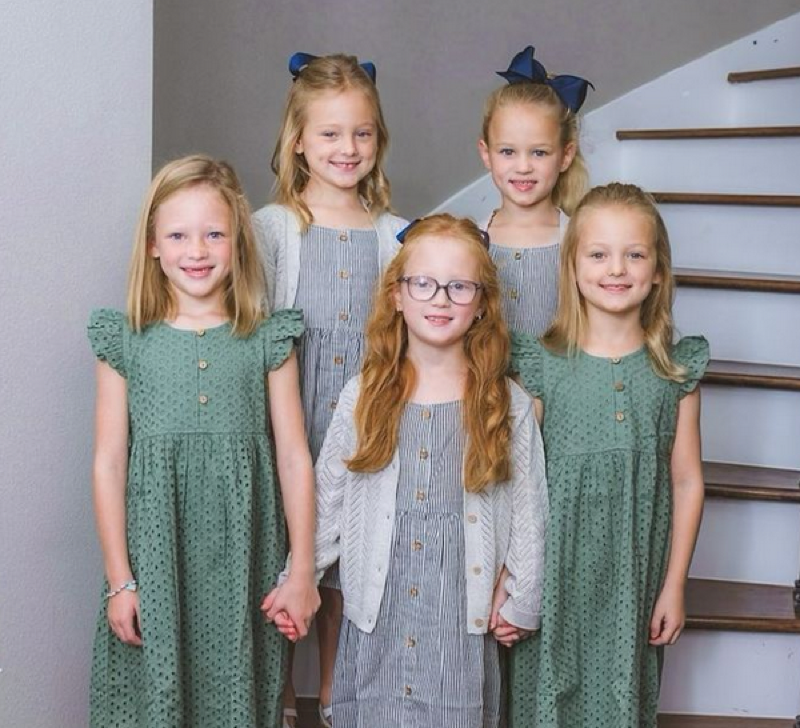 OutDaughtered fans know that the quints, Ava. Olivia, Hazel, Riley, and Parker Busby are very cute kids. However, this weekend, they seemed to look cuter than ever. Adam Busby shared lots of photos of them as they were part of the junior cheerleaders in Texas. Additionally, big sister Blayke was there taking part at the Houston Texans game against the Tennessee Titans.

OutDaughtered Starlet Blayke Busby Took Part With Her Cast On

It’s nice that Blayke was able to take part in cheerleading at the football game. After all, it’s not that long ago that she broke her wrist. At the time, she was doing some tumbling on the lawn at home, when she suddenly collapsed. Later, an x-ray revealed that she had a fracture. So, she was wearing a cast. But, that didn’t stop her from doing her best at the game. On Instagram, Adam shared that the kids got to meet Toro, the mascot for the Houston Texans.

OutDaughtered fans have definitely seen a lot of cuteness overload with the quints. However, Adam was so proud of the cute little girls that he shared multiple photos of them cheerleading. They came on both his Stories and his main profile page. Of course, Uncle Dale was also around cheering on the game and the Busby kids. Perhaps the kids’ cousins also took part in the event.

Our Teen Trends reported in June last year, that Hazel sat out the summer Cheer Camp. Apparently, she didn’t feel all that confident. However, perhaps she went this year,  as she also participated in the junior cheer team for the Houston Texans this weekend. Actually, it looked like all the kids had an absolute blast. The good news is, Adam will share a video on his YouTube channel soon.

In his caption, the OutDaughtered dad said, “The Girls have had such an unbelievable experience with the @texanscheerleaders and the @houstontexans. They were Junior cheerleaders for today’s game against the Tennessee Titans.” Then he explained that they met Toro, adding, “So many more cute photos to share and you don’t want to miss the video coming! 10/10 Day!”

OutDaughtered fans flooded the comments after they saw Adam’s post. Here’s a small sample from those people who reacted:

So cute they all look like they had a blast😍❤️.

I’m so happy they had fun hanging with the Texan cheerleaders.”

Are you excited to see the video of the girls doing their cheerleading at the Houston Texans game against the Tennessee Titans? Stay tuned as we will share it as soon Adam Busby uploads it.