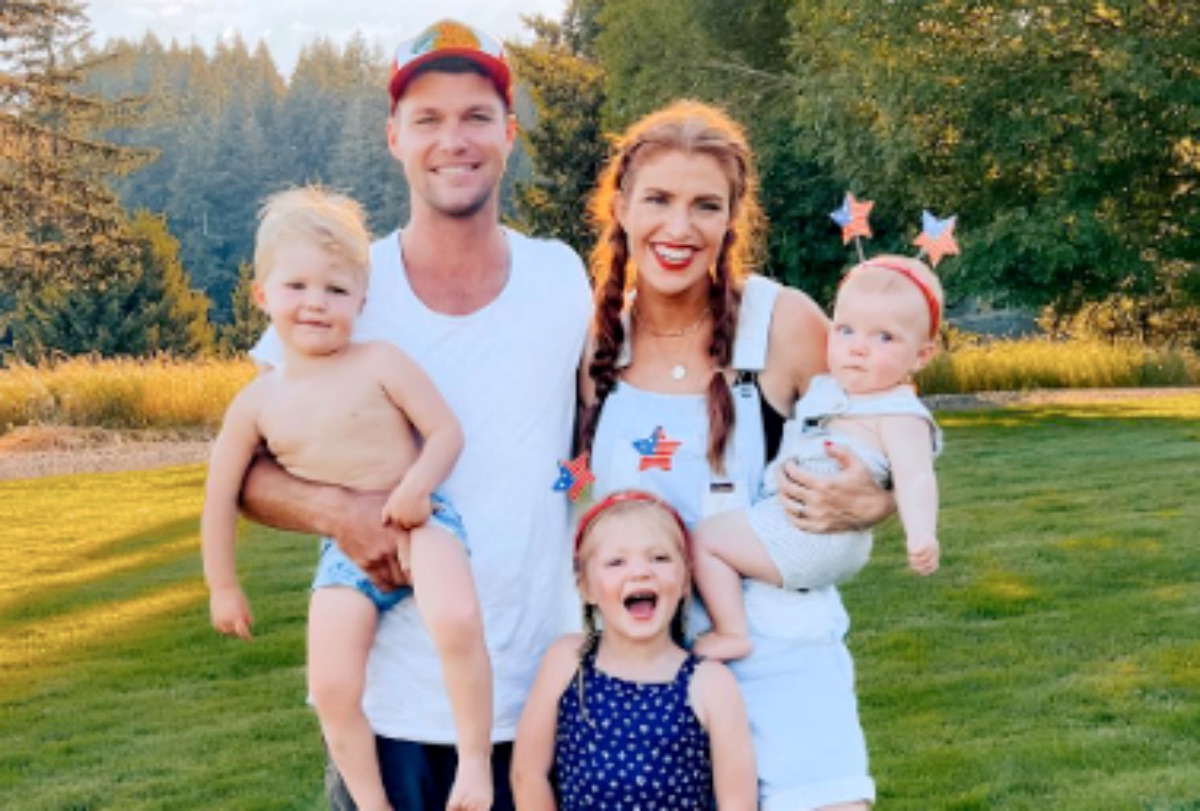 First of all, I’m pretty sure the Little People Big World Roloffs can take care of their children, I don’t think they would intentionally put their kids in harm’s way, it’s their children, they can handle them, except they’re careless parents, I don’t see the need for all the fuss.

Soo… Audrey and Jeremy swapped their gas stove for wood burning in their new cabin in Oregon, and Audrey took to her Instagram to upload the videos with the caption: “Swapped the gas stove out for wood burning.” Well, critics of the Little People, Big World stars claimed the appliance could be dangerous around their three young kids.

The video garnered reactions as some fans weren’t having it, they slammed the couple’s decision to get a wood-burning stove on a Reddit thread.

One wrote: “I understand they’re renovating, but this looks like a disaster. A wood stove out in the open looks like a big no-no for three small kids.”

Another added: “They love having hot fire around their kids.” A third posted: “Those wood-burning stoves are not uncommon in cold country. Parents need to watch their kids and teach them.”

Audrey And Jeremy Roloff — About Their “Cabin In The Woods”

Audrey and Jeremy’s “cabin in the woods” was bought in September, the cabin is located in Bend, Oregon. After the purchase of the cabin, Audrey made a post about it alongside Jeremy and their three children, all in front of the cabin, which was at the time covered in snow.

She captioned the sweet snap: “Our search for some land to raise our family continues in 2022. Thank you for following us on the hunt and for all your prayers as we continue searching and trusting God’s timing.”

“In the meantime we are excited to let you in on our newest project. This dreamy little snow covered cabin in the woods that you see behind us We’ve had our pulse on the Bend area for a while because we spend so much time here. Over the summer we saw this place pop up and Jer immediately flew (since that’s his newest hobby) out there with a friend to go see it.

“Everything that comes on the market in central Oregon goes so fast… I was super pregnant with Radley so I stayed home. Also not super comfy with the idea of flying with Jer yet. We ended up putting in an offer before I had even seen it in person! We were so pumped when it got accepted.” 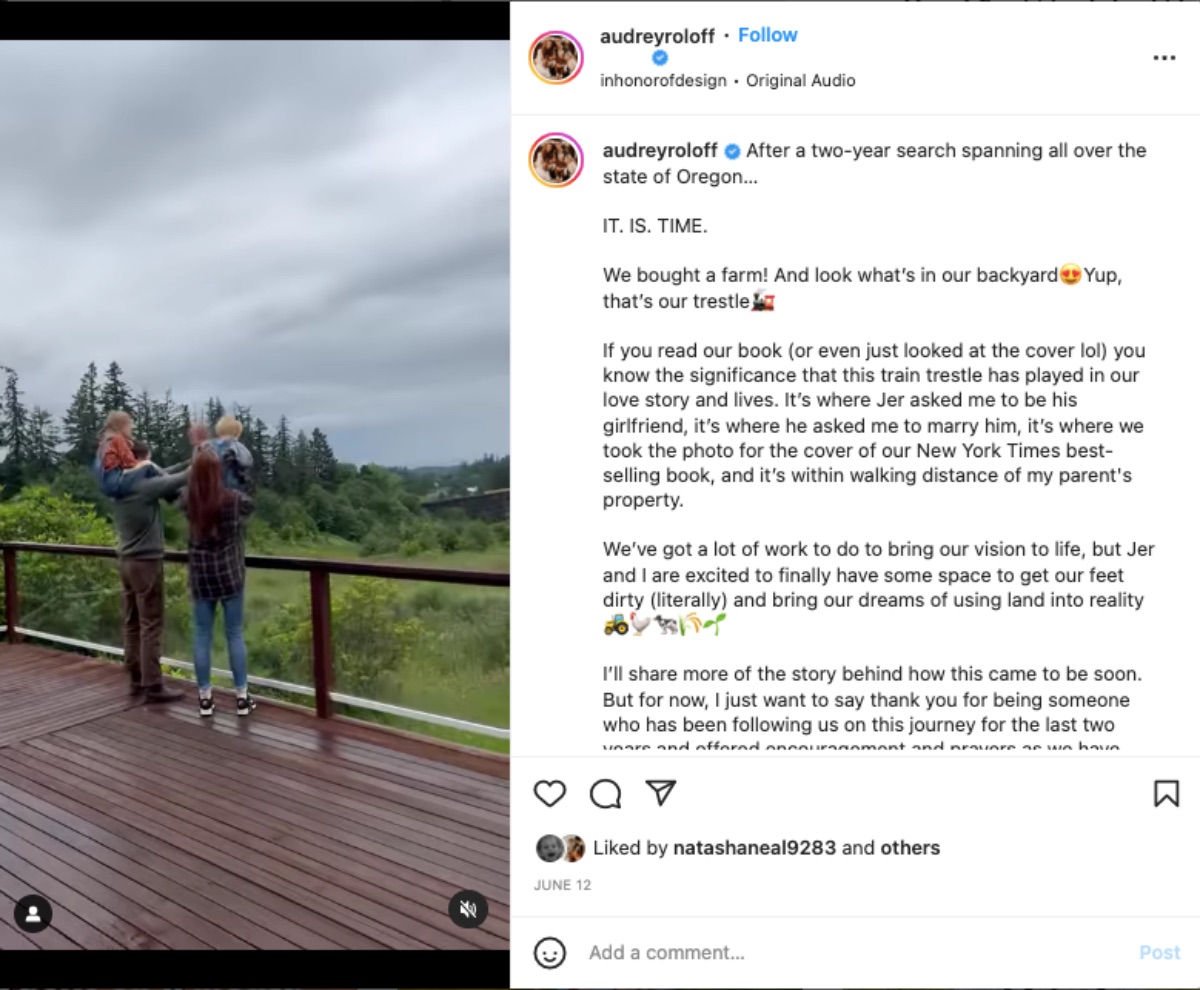 Audrey And Jeremy Roloff — Bought Their Own Farm

Jeremy and Audrey Roloff revealed they bought their own farm amid their family’s rift after.

It was Audrey who took to her Instagram on Sunday, June 12, to talk about the new purchase, the post read: “After a two-year search spanning all over the state of Oregon … IT. IS. TIME,” she wrote alongside a video that documented their time on Roloff Farms, as well as the new property. “We bought a farm! And look what’s in our backyard😍 Yup, that’s our trestle.🚂”

“If you read our book (or even just looked at the cover lol) you know the significance that this train trestle has played in our love story and lives. It’s where Jer asked me to be his girlfriend, it’s where he asked me to marry him, it’s where we took the photo for the cover of our New York Times best-selling book, and it’s within walking distance of my parent’s property,” Audrey explained.

The former TLC star went on to explain that they have “a lot of work to do to bring our vision to life,” though they’re “excited to finally have some space to get our feet dirty (literally) and bring our dreams of using land into reality.”

Audrey then thanked her social media followers for their support as they bought the farm. “I just want to say thank you for being someone who has been following us on this journey for the last two years and offered encouragement and prayers as we have patiently pursued some land for our family,” she wrote.

Christy is from Atlanta, GA. She has a nine-year old son, named Donovan. In her spare time, she bakes, loves going to the beach, and being with her family.