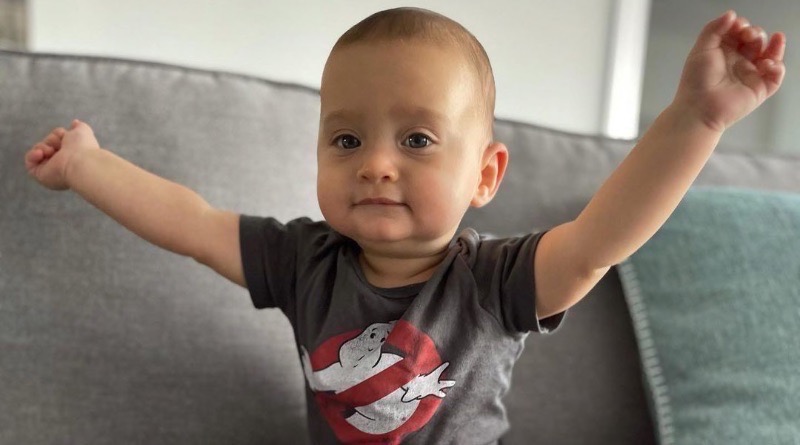 Just over two years ago,  90 Day Fiancé stars Alexie and Loren Brovarnik welcomed their son Shai Brovarnik. April 14, 2020, likely remains etched in the minds of TLC fans because so many of them adore the little boy. Of course, he’s not the only child that fans saw in the franchise, but for some reason, he stole the limelight. The child star soon welcomes a little sibling, and already, he proved that he’s very sweet with Asher who arrived in August last year. Well, Loren might hope for a girl this time, because she thinks she has already produced one Alexei clone.

The likeness of Loren’s first son to his dad seemed very obvious from the youngest age. At 15 months old, a photo on social media showed that he clearly took after his dad. Extremely cute, he plonked himself down in a basket and smiled for the camera. Those people who follow the couple often saw that he loved nothing more than copying his dad. Whether they sat on the couch or went for a walk, he seemed to replicate every move that his father made.

Although the 90 Day Fiancé kid seemed to pick up his sense of fashion and style from his mom, he remains very much his father’s child. At least, Loren seems to think so. But, some fans are not too sure about it. Some of them think that Shai has all of his dad’s moves but he looks a bit more like Loren’s mom. Well, those who think that Shai isn’t a replica of Alexei might not convince Loren that she’s wrong.

90 Day Fiancé – Loren Says She Was Just ‘The Vessel’

On Friday, July 29, Loren took to her Instagram and shared that she felt like a “vessel.” So, she said to her fans, “tell me you carried your husband’s clone, without telling me you carried your husband’s clone.” Next, she turned the pages of a book that she made, and it revealed Shai Brovarnik and Alexie in different situations. In the first one, he wore his shades just like his dad and waved at the camera like a clone. Other photos revealed similar likenesses.

90 Day Fiancé fans took to the comments section of the post, and some of them disagreed that Shai’s his dad’s clone. One of them wrote, “Ooown… I think he looks like you girl… he’s got dad’s moves.”

The Clone Vote Is In?

While some fans agreed that 90 Day Fiancé star Alexei looks a lot like his son, most people think that Shai Brovarnik leans more toward Lorenl’s side of the family. In fact. a lot of them seem to think that Asher resembles his dad more than Shai does. If Loren has a girl next, then they believe that will settle the argument once and for all. What are your thoughts? Do you think that her oldest son has his dad’s moves but resembles his mom? Or do you agree with Loren that she carried her husband’s clone? Sound off in the comments below.