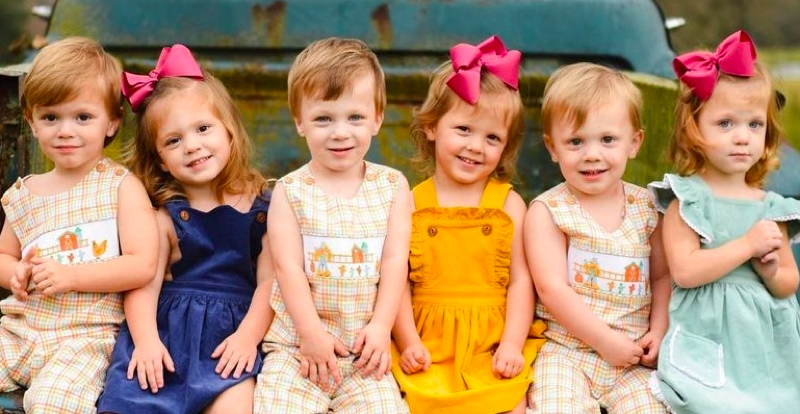 Sweet Home Sextuplets fans still see all the news about Eric and Courtney Waldrop via her Instagram. Although they opted out of the TLC show, updates come from Courtney all the time. But recently, it hasn’t been all good news. In the last year, three of the kids hurt themselves. Now, one of the boys also ended up there just ahead of the Easter break. So who is it this time? Is it serious? Read on to find out.

Apart from routine visits to the doctor’s room, the kids sometimes hurt themselves when they are playing around. When their mom took the three girls, Rivers, Rawlings, and Rayne for their shots, Rivers wasn’t feeling it at all. Well, that seems understandable, as she busted her chin and she ended up at the ER. Perhaps she felt a bit traumatized by that. After all, she’s only four months past her fourth birthday.

When her sister Rayne also busted up her chin earlier this month, the Sweet Home Sextuplets’ mom told her fans that Rawlings also visited the ER. Poor little Rawling broke her arm. Well, the family raises nine kids, so probably, the ER gets used to seeing the family there. Fans always predicted that Blu would be the one kid mostly likely to become a regular at the hospital. However, it never worked out that way.

On April 12, Courtney Waldrop took to her Instagram and shared a few photos of her eldest son, Saylor. He’s the one in the ER this time. In her post, she explained that he was playing basketball when he injured his foot. She noted in her caption, “Saylor possibly has a broke foot!!” Apparently, he heard an ominous “crack” when he landed awkwardly. Well, the doctor took x-rays and sent him home under instructions to put a lot of ice on it. Upset, his mom said, “Eric has him icing 3 times a day in a 5 gallon bucket of ice water🥶🥶 it hurts me just watching him!!”

The Sweet Home Sextuplets’ mom sounds a bit stressed as well, and she wrote, “Ok we just need to rent a room at the hospital😩.” Well, with nine kids, it’s not all that surprising that the ER becomes an occasional destination for the family. Bear in mind, they have three very active boys amongst the sextuplets. Plus, there are the twins, Bridge and Wales, as well as the three little girls. The only good thing though is that somehow, Tag, Blu, and Layke managed to stay reasonably injury-free in the past year.

Sweet Home Sextuplets fans took to the comments section of the post. One of them said, “Oh no 😱 sorry to hear, let’s hope & pray icing the foot will be all that he needs!! 🤞🤞💙”

Another fan commented, “Oh no, sending healing prayers to Saylor! Hang in there Mom and Dad! 🙏🏽🙏🏽🙏🏽”