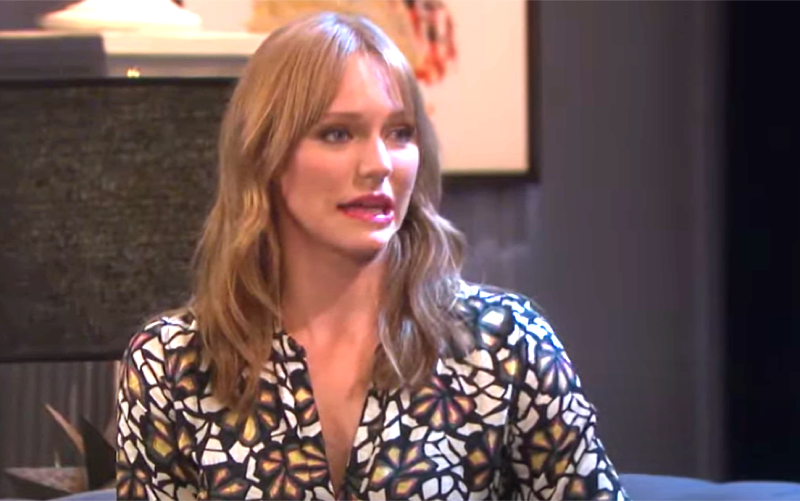 Days of Our Lives (DOOL) spoilers and updates tease that Abigail DiMera (Marci Miller) will cook up a plot to ruin Gwen Rizchech (Emily O’Brien) and Xander Cook’s (Paul Telfer) wedding in an upcoming episode of Days of Our Lives!

Days of Our Lives viewers will remember that Ava Vitali (Tamara Braun) gave Gwen a stern warning that if she went down, Gwen would go down with her, after the two of them collaborated on various crimes under pressure from Kristen DiMera (Stacy Haiduk). That statement keeps running through Gwen’s mind and it absolutely terrifies her as she runs into Gabi Hernandez (Camila Banus) and she tells her that Ava had been arrested, and so Gwen rushes over to Salem jail to talk to her. Gwen just knows that things won’t go smoothly, and she desperately needs Ava to keep their secret to herself, so it doesn’t stop her wedding to Xander Cook (Paul Telfer). What Gwen doesn’t know yet, however, is that her half-sister and matron of honor, Abigail, has found out that Gwen was Ava’s accomplice in assaulting her at the Salem airstrip! Days of Our Lives viewers will recall that Abigail tracked down “Sarah Horton” (Linsey Godfrey) and tore the Sarah mask off of her, and Gwen came up from behind and knocked her out with a large rock to the back of the head!

Days of Our Lives viewers will see Abigail plot to ruin Gwen’s wedding even as Gwen thinks it’s going to be smooth sailing, Abigail acting rather smug and duplicitous as she knows that soon she’s going to see Gwen’s world blown apart! Days of Our Lives viewers may think it’s a shame, since Gwen has worked so long and so hard to redeem herself, and thinks the vitriol between herself and her half-sister is all in the past when obviously, it’s not as far as Abigail is concerned! Abigail, ever the intrepid Salem Spectator reporter, has also found out as she’s been on the crime beat that Ava made an immunity deal with District Attorney Melinda Trask (Tina Huang) to throw Gwen under the bus for her freedom! Abigail cannot wait to deliver the happy news just in time to burst Gwen’s bubble of happiness she’s thought she found with Xander and blow up her wedding before her eyes! 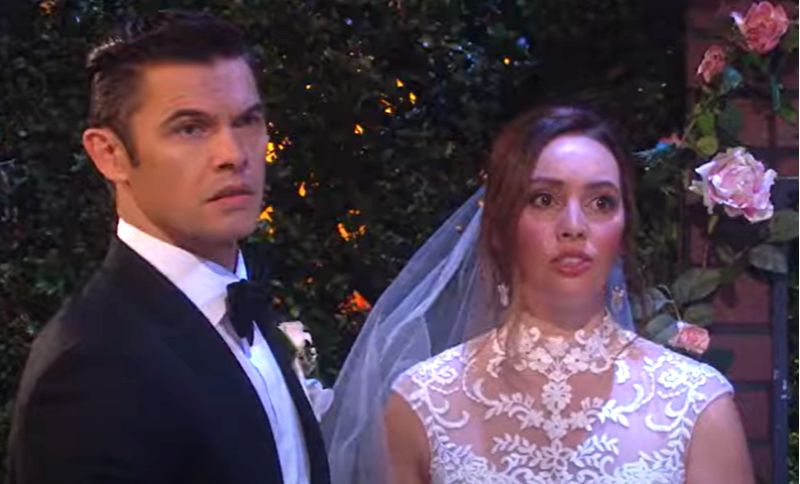 Days of Our Lives viewers will see the wedding guests gather at the Horton Town Square for the double wedding of Xander and Gwen and Craig Wesley (Kevin Spirtas) and Leo Stark (Greg Rikaart), whose wedding will also be blown to smithereens with a shocking announcement!

But first, Days of Our Lives viewers will see Abigail greet her mother, Jennifer Deveraux (Melissa Reeves) at the Horton House and tell her what she found out and her plan to bring Gwen down as Gwen has a pleasant conversation with Jack Deveraux (Matthew Ashford). Craig and Leo’s wedding implodes first, as Chad DiMera (Billy Flynn) delivers major dirt on Leo, and then before Xander and Gwen can get to thier I do’s, Abigail makes her announcement! At first, Gwen simply denies it, but then she starts to panic when Abigail reveals more and more details about Gwen’s crimes against both her and Sarah and she realizes there’s no way around it!