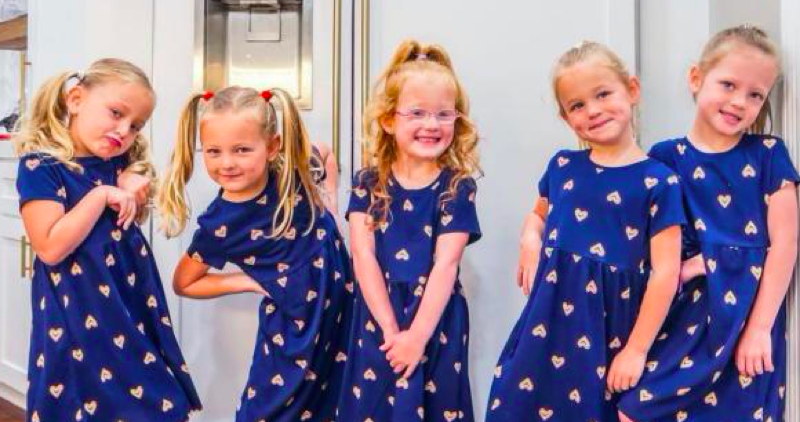 OutDaughtered updates and spoilers revealed that Hazel was the first Busby quint to take to fishing. Well, in time, all of the quints tried their hand at it. But on their latest expedition, one of the quints caught a bird, and that added some drama to the It’s A Buzz World video on YouTube. Some fans questioned that the family use barbs on their catch and release hooks. Meanwhile, others felt bad for the bird.

Originally, Adam thought that Hazel had the right temperament for fishing. Recall, it came about a year ago when they went on vacation. Well, the other quints didn’t really like it very much. More recently, Ava said that she didn’t like fishing. Even Riley didn’t seem into it as she really isn’t the patient type of person that Hazel is. Well now that the kids are nearly seven years old, they seem old enough to give it another try. So, fans saw that Adam took them out a few times.  This time, they actually caught some fish.

OutDaughtered fans last saw the family on TV back when Danielle Busby battled a mystery illness. At one stage, she thought that she might need heart surgery. Since then, very little news came. Perhaps the TV show drops the storyline and focuses on something else, like the quints going fishing. Unfortunately, though, Adam hinted very strongly that they might not return. In fact, he said they might discuss it in a video on his own YouTube channel. For now, fans wait for confirmation, and instead, watched the quints go fishing again.

In a recent Instagram post, Danielle shared a short teaser for the fishing expedition. In it, it revealed that Oliva caught a bird instead of a fish. Well, Danielle directed her fans to the new video on YouTube, and fans saw it all play out. Adam showed Blayke and Riley how to release their fish after they caught them. Meanwhile, Olivia cast out, and quite by chance snagged a bird flying by. Although Adam released it carefully, Olivia seemed upset because the bird looked terrified. Actually, Adam told fans not to stress too much as “no animals were harmed.”

In the comments section, one OutDaughtered fan suggested that as they seemed to wish with barbed hooked, they might still hurt the fish. So, they advised that the Busbys cut off the barbs or buy barbless hooks. Meanwhile, Riley seemed to think it was all a bit pointless to catch a fish just to set it free. Naturally, fans also felt bad for the bird. However, it flew away and probably will be okay. One fan commented that they also experienced something similar once, and it really was just sheer chance that Olivia cast her line as the bird flew by.

On A Side Note

In the comments, some OutDaughtered fans discussed the rumors that the show might not get another season. With the possibility arising that OutDaughtered might not return to TLC, an awful lot of comments from Japan seemed interesting. It looks like the show just reach Japan. Perhaps the Bubsys might still earn some money off the show if it isn’t renewed by the network. Many comments arrived from that country. Here are a couple of examples:

Be sure to catch up on everything happening with the Busby quints right now. Come back here often for more Outdaughtered spoilers, news, and updates.