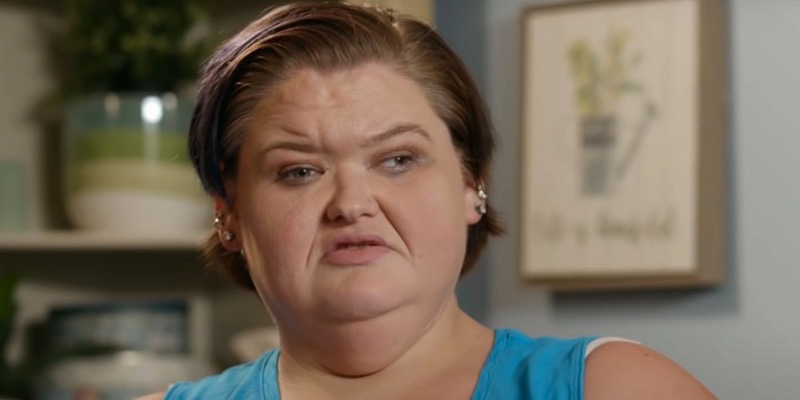 1000-LB Sisters spoilers reveal that Amy Halterman is holding back very little about her second baby. She and her husband raise Gage Deon, who is two years old now. Well, in the summer she will have another baby. So far, she announced her pregnancy, revealed the gender, and said what name they chose. This time around, did she name her child after a serial killer?

1000-LB Sisters StarAmy Halterman Hides Nothing About Her Baby

When Amy Halterman had her first baby, she shared the gender and the name, but fans didn’t see photos of Gage until Season 2 arrived on TLC. So, the fact that she announced her second pregnancy, name, and gender of her second child doesn’t necessarily mean fans won’t see Season 4 happen. When the gender reveal came along, she shared a rather long and drawn-out video. It took time for everyone to write up what they thought she might have and she seemed a bit down. It’s another boy and she hoped for a girl.

In January, the 1000-LB Sisters star gave an update about her pregnancy and she seemed very happy. Actually, the news came along at 15 weeks, that she still waited to find out the gender. However, she seemed very unhappy when she found out that she is having a boy. So, the video seemed a bit forced and she even tossed out the name of the second baby while checking something on her phone. That came right at the end of the video. Hopefully, she will grow to love the child when he’s born.

Is The New 1000-LB Sisters Baby Named After A Serial Killer?

It should be noted that when Amy Halterman revealed the name of baby #2, the reaction from the guests at the function was underwhelming. Clearly, it didn’t go down well. Of course, there’s no way of knowing why, but fans do know that she named her first child after the killer baby in Stephen King’s Pet Sematary. Well, the reactions from fans who knew about the malevolent creature were predictable and it went down like a ton of boiled maggots.

If you don’t know, the 1000-LB Sisters star decided to name her second boy, John Allen. Actually, given that she chose a gruesome character for her first child’s name, it’s not beyond the possibility that she named her second child after John Allen Muhammad. Of course, there are other folks named John Allen, like the fictional character in the hit show Neighbors, that was acted by Adrian Mulraney. However, that sounds a bit too feeble for Amy.

Who Is John Allen Muhammad?

1000-LB Sisters star Amy Halterman probably heard about John Allen Muhammad back in 2009. He was convicted for killing two people in Virginia, and six in Maryland. However, he was linked to many other murders and was involved in the DC Sniper attacks. Finally, the former military service member was executed in 2009. Meanwhile, his sidekick, Lee Boyd Malvo was jailed for six life sentences.

Of course, Amy might not have named her baby boy after him. What are your thoughts? Sound off in the comments below.