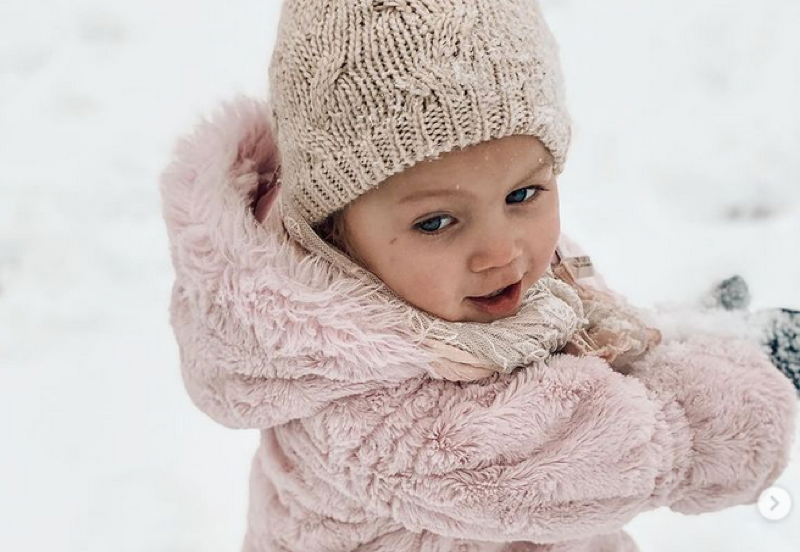 Sister Wives babe Evie Brush pulled at the heartstrings of TLC fans ever since Maddie brown Brush told them about her daughter’s FATCO syndrome. This week, she demonstrated her determination to face life full-on, and when she won out, she gave her mom a sweet smile of victory. Well, it’s just too much for some fans, who don’t know whether cry or cheer for the cute kid as she becomes more independent.

Maddie Brown Brush celebrated her daughter’s second birthday in August last year, and Evie seems to have skipped the terrible twos completely. Actually, she seems way too busy skipping through life without afoot tSister0o worry about being predictable. Active, stylish, brave, and determined to seem to cover most of her strong points. Actually, TLC fans sing a lot of praises about Maddie and her husband Caleb. Parenting goals seem to inspire many people across the world.

Right out the gate, the second Sister Wives grandchild faced challenges that few other kids go through. Born with fibular aplasia, tibial campomelic, and oligosyndactyly, she had fewer than ten fingers, fewer than 10 toes, and no fibula. Clearly, the cute baby girl faced a lot of physical and mental challenges as she grew older. Well, fans agree that she might never have coped with those challenges without her strong mom and dad to encourage her. Actually, she seems to be very proud of the false foot that she wore since her Boyd amputation.

Maddie Brown Brush updated fans about her little girl over the years. In one post, she revealed Evie trying and trying again and again, to conquer the steps up a kiddy slide. However, she knew that Evie needed to fight her own battles. So, she cheered her on, despite the temptation to rush over and help her. These days, fans see a well-adjusted and cheerful child determined to put on her own special stocking that helps to support the foot.

Sister Wives babe Evie Brush impressed her mom with her determination to demonstrate her independence. On Instagram this week, Maddie captioned the photos with, “Miss independent! 👏😍.” Christine’s son, Paedon Brown commented, “Oh it pulls at the heart.” Those six words say a mountain of things, but TLC fans get it as they feel the same way.

Sister Wives fans said plenty of nice things about Evie Brush in the comments section. One of them penned, “Evie is one of the most beautiful girls I‘ve ever seen! It always makes me smile when I‘m scrolling through my feed and suddenly Evie smiles at me (all of us) with such a bright smile! She radiates positivity! ☀️🎉💛”

Others just can’t seem to find any words to say that don’t involve “cute.” Actually, “proud,” ” beautiful,” “independent,” and “courage” littered the comments.