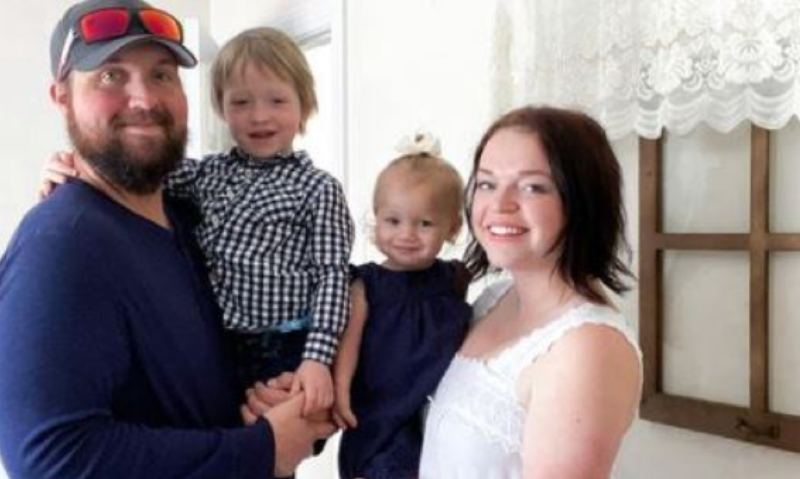 Sister Wives (SW) fans see that Maddie Brown Brush took to married life and parenting very well. Actually, she seems to adore being a mom and wife, though she still studies as well. Often, she posts up snaps of the family, but this week she shared some really nice photos. It looks like they were taken professionally, and fans really liked them a lot.

In 2016, fans saw on the TLC show, that the Brown family was still rocked by Meri’s catfishing scandal. Then, they saw that Maddie dropped out of college. A lot of fans felt disappointed, as she only completed her Freshman year. Just 19 at the time, she relocated to Montana to be with her fiancé Caleb Brush. Some fans wondered if it would work out as he is nine years older than her. Well, they needn’t have worried, and this year, their second child, Evie-K turned two years old.

Sister Wives fans realize now, that Maddie Brown Brush seemingly struck gold with Caleb. They relocated to North Carolina and recently purchased a new home. Fans also feel very happy that her son Axel gets along so well with his little sister. In fact, for many of them, the family sets parenting and couples goals. Clearly, Maddie doesn’t regret leaving college to make a family with Caleb.

Maddie Brown Brush took to Instagram on Saturday, October 2. There, she shared some really nice photos. The second one revealed the two kids together. But, the main photo of the whole family seemed really excellent, fans agreed. In her caption, she wrote, “Family photos came back! 😍 I’m so in love with this cute family of ours! 💛💛” Unfortunately, if they were taken by a professional she didn’t mention the name.

The half-brother of the Sister Wives star, Paedon Brown joined in the conversation in the comments. He wrote, “Oh my gosh, they are so adorable, such a beautiful family, I miss you guys so much.“

Actually, Paedon often seems saddened that Kody moved so much that the family is scattered around Utah, North Carolina, Arizona, and Chicago.

In the comments, many fans told  Maddie Brown Brush that they also love her little family. One fan penned, “Such a beautiful family! Your daughter is a mini me!❤️” Then another fan wrote, “Oh fab photos. Kids are getting so grown up x.”  Many fans can’t get over how fast the kids grow up. One SW fan noted, “Omg when did they grow up!?! 😭 a beautiful family and gorgeous kiddos!“

What did you think of the first photo that Maddie shared? Do you agree it perfectly captures a loving and very sweet family? Sound off in the comments below.

Be sure to catch up on everything happening with SW right now. Come back here often for more Sister Wives spoilers, news, and updates.