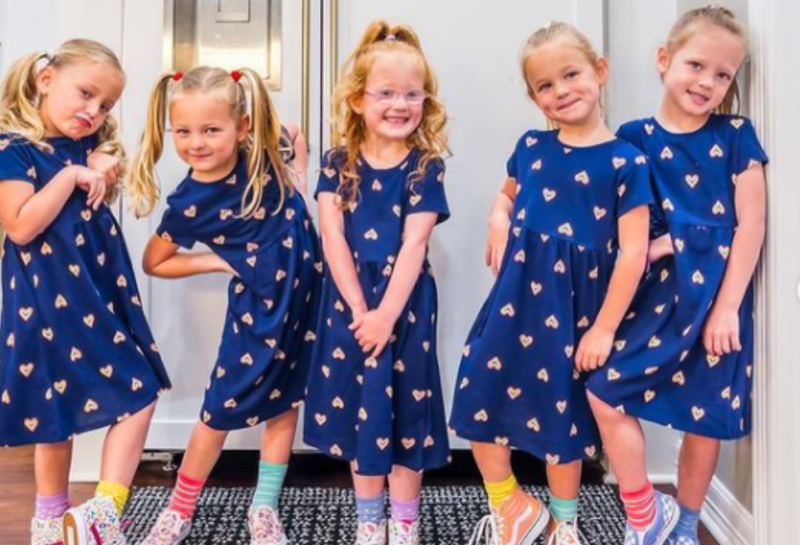 OutDaughtered spoilers and updates tease that fans saw that in early spoilers on TLC, Adam Busby banned makeup in the house. In fact, he had reason to, as the quints were just toddlers and spread it all over the place. Later, he relented and even let the kids paint his nails. Playing at big girls in the house now seems to have spread to allowing the quints to wear makeup in public at the tender age of six-year-old. Is that too young?

In so many ways, the cute Busby quints are still little girls. They adore their dolls and stuffed toys and unicorns. In fact, they still believe in the tooth fairy and stress when they lose their teeth, in case the fairy doesn’t stop by with a reward. That happened to Ava who ended up writing a letter explaining what happened. And yet, Ava was the first quint seen out in public wearing makeup.

The OutDaughtered quints now attend school and they are all in Grade 1 together. Riley, who went into Kindergarten ahead of her siblings, seems quite independent and grown-up these days. In fact, she proved to her dad that she can easily make a delicious and nutritious lunch for herself. And now, her mom Danielle revealed a spoiler photo that shows she really knows how to strut her stuff with makeup on.

Adam Busby shares photos of the kids out and about and some of them revealed that the beauty shop gets their attention. In fact, he described them on Instagram as being “in heaven.” TV Shows Ace noticed that Ava wore makeup in public when her mom took her out shopping with Blayke. That came back in August this year. Previously it seemed they were confined using it to the house and yard.

A new photo emerged on September 10, that showed OutDaughtered quint, Riley looking rather vain and glammed up with her bright red lips. Taken in the car clearly, they went somewhere outside of their yard. Danielle captioned it with, “My lipgloss be poppin 💋.” One fan pointed out that his wife uses the same stuff. Meanwhile, others thought that Riley looked a bit vain, but they loved the photo. 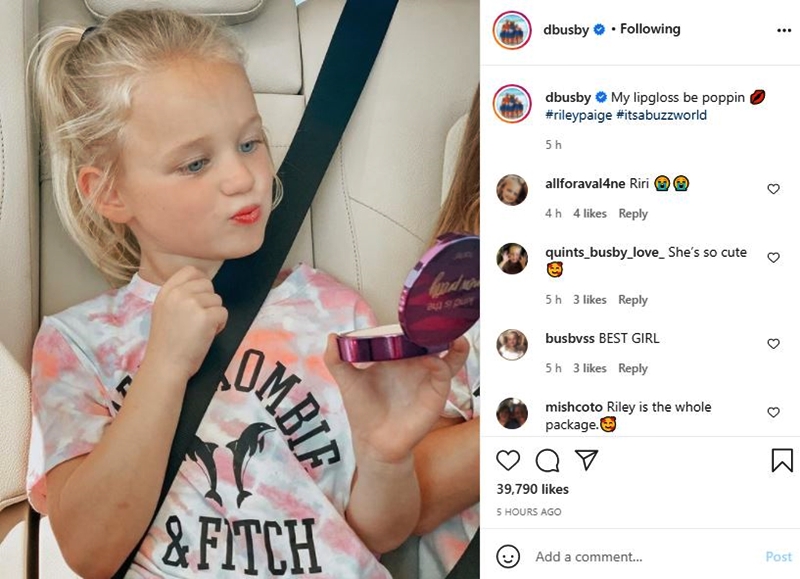 One fan commented, “Riley is the whole package.🥰” Then another fan noted, “Riley vain and beautiful!❤️”

Is Six Too Young?

Carrie Krawiec, a licensed marriage and family therapist told SheKnows that lip gloss is probably okay for smaller kids. However, she’d draw the line at eyeliner until they are older. Many kids start wearing a bit of makeup at school by about the 4th Grade. Well, the quints have a long way to go until then.

Meanwhile, Bella Online notes, “Usually, 14 to 15 is an appropriate age to begin using cosmetics, but even at this age it should be light and minimal.” The outlet points out that kids only get a few years to be kids. After that, they become adults for the rest of their lives.

Be sure to catch up on everything happening with the Busby quints right now. Come back here often for more OutDaughtered spoilers, news, and updates.