The Little Couple Spoilers: Zoey Klein Has A New Love In Her Life

The Little Couple spoilers and updates tease that fans take the news about Zoey Klein and her brother Will where they can find it these days. After all, it’s been a long time since TLC aired a new season for the family. So, they resort to following Dr. Jen Arnold on Instagram. At least they see the kids as they grow up so fast since the last season ended in 2019. Now, Jen shared that Zoey found another animal to love and fans agree that it’s really cute.

When fans saw Zoey for the first time, she was a shy and terrified baby girl from India. In fact, she even feared Bill Klein for a long time. Pushing away from Dr. Jen as well, she only really bonded with her when Jen recovered at home after her cancer diagnosis. These days, TLC fans see a well-rounded young girl, full of creativity and personality. They also see that she loves animals very much.

Fears by fans that The Little Couple might not get renewed seem very real. After all, there’s no over-the-top drama like they see on 7 Little Johnstons. Plus, there’s no toxicity like they see on Little People, Big World. Sometimes, all families want is a fun show with cute kids exploring their world. Hopefully, the show gets renewed before the kids get any bigger. Possibly, they wait for the coronavirus to dwindle away if it ever does.

This weekend brought a couple of updates from Dr. Jen Arnold.  In one post, fans heard that Zoey Klein went for the last ride on Mozart, a horse at her riding club. Screen Legion reported that the club closes down, hopefully only temporarily. Apparently, they are a non-profit outfit and don’t own their own place. So now the property they lease is for sale, things look grim. Fans know that Zoey adores horses, so hopefully, it’s not the end of her horse-riding days. 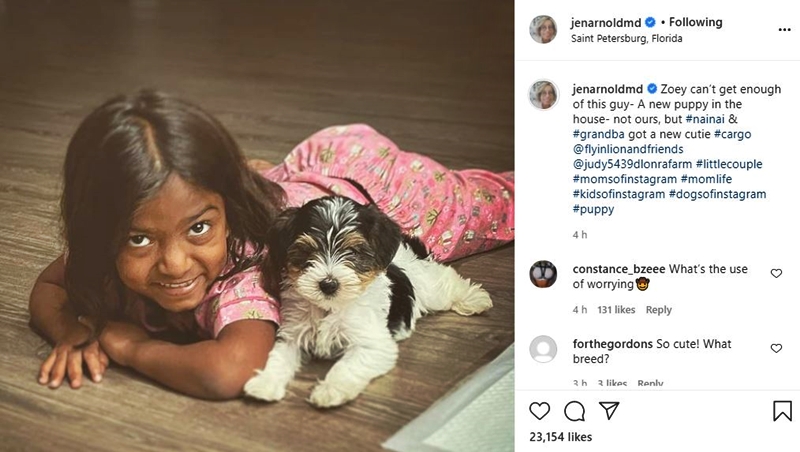 Well, it looks like The Little Couple kid found another animal to love. On Saturday, August 28, Dr. Jen told her fans that Zoey Klein found a puppy to love. Actually, she explained that it belongs to grandad and grandma. In her caption, she said, “Zoey can’t get enough of this guy- A new puppy in the house.”

Actually, TLC fans loved the photo for its cute and wholesome value.

What Kind Of Dog Is It?

Fans wondered what type of doggie Zoey Klein fell in love with. Those in the know suggested that it looks like a Biewer Terrier puppy. According to the American Kennel Club, they are affectionate dogs, great with kids, and are very intelligent.

Remember to check back with us often for more news, updates, and spoilers about the cast of The Little Couple on TLC.