General Hospital (GH) spoilers and updates tease that soon Anna Devane (Finola Hughes) and Valentin Cassadine (James Patrick Stuart) will chase down a new lead in their search for baby Louise Jones (Harper and Scarlett Bloom) in an upcoming episode of General Hospital!

General Hospital viewers will recall that Anna was looking for information as to how Peter August (Wes Ramsey) may have escaped from General Hospital with no one knowing. Viewers will recall, of course, that Peter did NOT escape – Dr. Hamilton Finn (Michael Easton) and Peter got into a scuffle over the dose of antidote for Harrison Chase (Josh Swickard) that Peter threw off the roof of the hospital.

Finn flew into a rage and pushed Peter down a stairwell to his death. Peter’s been “cooling off” in Helena Cassadine’s (Constance Towers) old laboratory in the sub-basement of General Hospital in a morgue freezer ever since. Anna had an idea that could be where Peter might have hidden, but Elizabeth Baldwin (Rebecca Herbst) managed to distract Anna away from the freight elevator on the roof which was the only way down to the sub-basement and Helena’s lab. 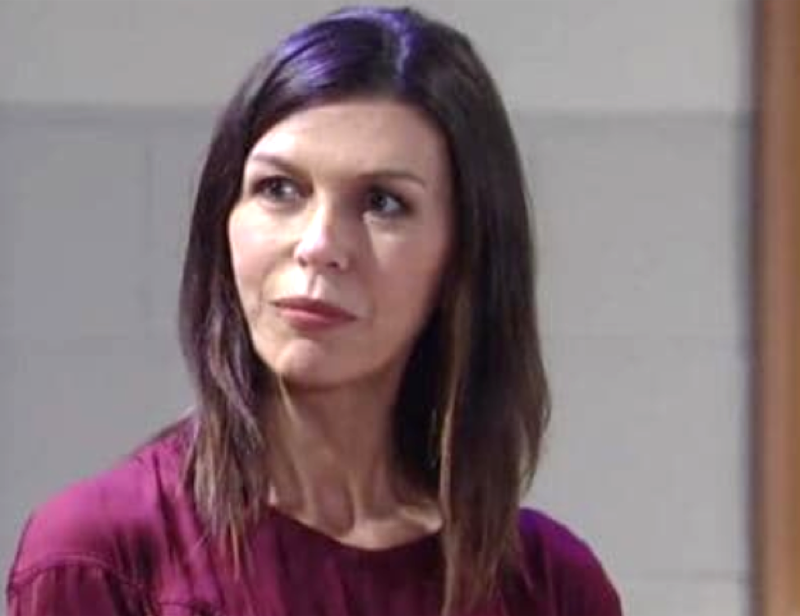 It had been sealed off after Olivia Jerome (Tonja Walker) had kidnapped Dr. Griffin Munro (Matt Cohen) and tried to channel Duke Lavery’s (Ian Buchanan) spirit into him using Chinese folk medicine!

While discussing the missing baby case with Valentin, Anna told him that she had found evidence of a helicopter in the area whose pilot hadn’t filed a flight plan and that she thought perhaps Peter had escaped with the helicopter. This will likely be the lead they will chase down.

General Hospital viewers will recall that Anna discovered that the pilot was a pilot for hire, and he will turn out to be a man named David Hopkins (name of an actor not yet released) and the brother of Fake Chloe Jennings (Kimberly J. Brown). According to previously released script leaks, he is a former Black Hawk helicopter pilot. He had served in Iraq with an honorable discharge and flew various charters from Hawaii to Maine before striking out on his own.

After Detective Dante Falconeri (Dominic Zamprogna) and Dr. Austin (Roger Howarth) found Fake Chloe’s body and it was returned to General Hospital, her DNA was tested and found to match a woman named Marie Hopkins. General Hospital viewers will recall that Hopkins refused to pick Peter up.

This was after Fake Chloe/Marie Hopkins had fallen to her death in the abandoned mine shaft near Pautuck, New York. Perhaps the reason he didn’t pick Peter up is that he could not contact his sister and he knew she had been working for him. Anna will encounter David Hopkins in a bar in New York City while she and Valentin are there, and he will mention that his sister had disappeared along with a baby.

Anna and Valentin will likely track him down through information on the helicopter itself, perhaps a number on the helicopter that identifies it possibly through security footage garnered from buildings neighboring General Hospital. Hopkins may be in search of his sister and suspect Peter killed her after taking the baby, and they may join together in the search.