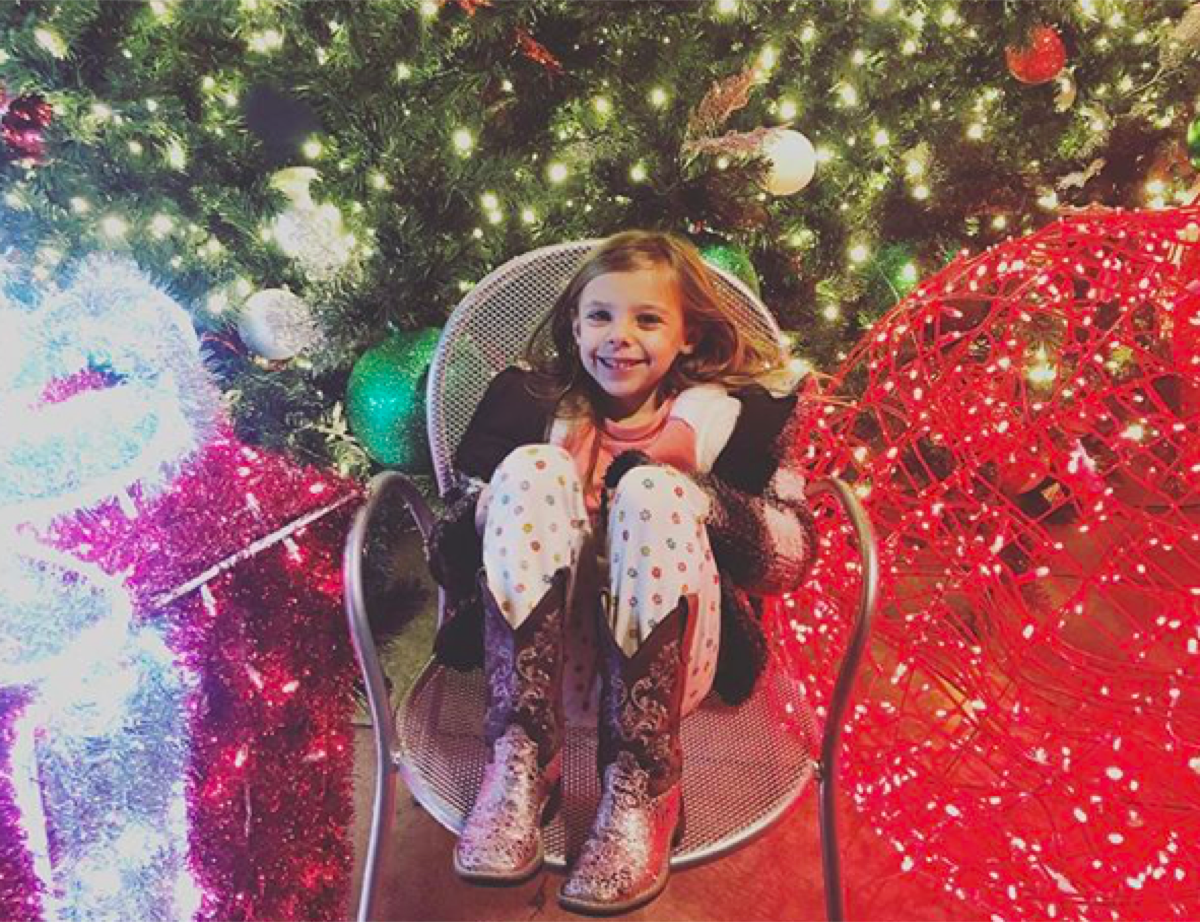 ‘General Hospital’ spoilers announces that Harper Rose Barash and her mommy Kirsten Storms want to wish everyone a Happy New Year with another adorable picture of Harper!

Harper Rose almost looks like she’s in a Christmas tree among the ornaments as she poses in a chair in front of a large, well decorated tree and in between two ornaments as large as she is which are probably photoshopped in. She has a pair of cowboy boots on, polkadot pants, pinkish top and a jacket.

Between her parents, General Hospital’s Kirsten Storms, and Days of Our Lives’ Brandon Barash, Harper is just all over the place with cute photos on Instagram, Facebook, and Twitter! Brandon recently posted on his Instagram about his daddy-daughter date to “Frozen: The Musical”, and of course it was also covered right here on Celebrity Baby Laundry!

Harper Rose appeared on General Hospital as Georgie Spinelli, the daughter of her mother’s character Maxie Jones and Damian Spinelli, played by Bradford Anderson from February 13, 2015 through April 14, 2015. She was just a baby, not quite one year old. Her parents met on General Hospital when Brandon played another character, Johnny Zacchara. The couple, although divorced, do an excellent job of co-parenting their little girl and it’s plain to see Harper Rose is a very happy little girl whether she’s with her mommy or with her daddy.

Both parents post massive amounts of photos on all of their social media accounts, and her birthday is coming up in just a few days from now, January 7th. Fans of the family and of Harper Rose herself can’t wait to see all the pictures her parents will post of her sixth birthday party and if she might even have two of them, with Kirsten hosting one and Brandon hosting the other! Maybe they might even surprise us by having her birthday party together so Harper Rose gets to be with both of her parents at the same time on her birthday!

Although she’s used to spending time with either parent separately, it would be a happy surprise for her if they decided to get together for this important sixth birthday! Celebrity Baby Laundry readers can see Kirsten Storms on ABC’s General Hospital, and can watch for Brandon to return to NBC’s Days of Our Lives in the next few months – and if you look real hard, you might even be able to find some episodes of Harper Rose’s appearances on General Hospital online!

Keep watching the soaps, and check out Celebrity Baby Laundry frequently for all the latest announcements!