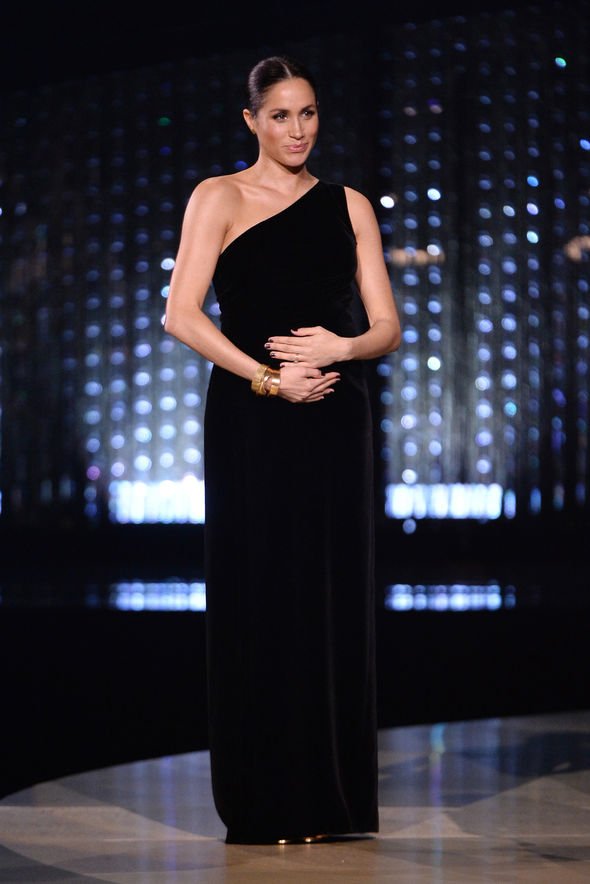 Meghan Markle stunned the crowd during her surprise visit at the British Fashion Awards in London this week. The Duchess of Sussex, who is expecting her first child with Prince Harry, was there to help honor the designer of her wedding gown during the fashion industry’s big night.

According to reports, Meghan was on hand to present the British Designer of the Year Womenswear Award to Clare Waight Keller at the Royal Albert Hall in London. She is the first female artistic director of the fashion label Givenchy. Meghan herself wore a black one-shoulder Givenchy velvet gown and had her hair pulled back in a sleek low bun. She also wore minimal makeup for the occasion.

Meghan told the crowd at the awards show,

“As all of you in this room know, we have a deep connection to what we wear, sometimes it’s very personal and sometimes it’s emotional. But for me this connection is rooted in really being able to understand that it’s about supporting and empowering each other, especially as women.”

Tell us, what do you think of Meghan Markle’s maternity look at the British Fashion Awards? It’s safe to say that the Duchess is enjoying every moment of her pregnancy and better yet, she’s both glowing and growing!

As a matter of fact, there’s even speculation that Prince Harry and Meghan Markle might be expecting twins, as her baby bump has suddenly “popped out” so to speak, although it has not been confirmed. There’s even a possibility that Meghan might be further along than previously reported. Kensington Palace has stated that the Duchess is due sometime in the Spring of 2019.

In the meantime, drop us a line with your thoughts in our comments section below. And as always, don’t forget to check back with Celeb Baby Laundry for all the latest news and updates on Meghan Markle’s pregnancy along with your favorite celeb parents and tots right here!