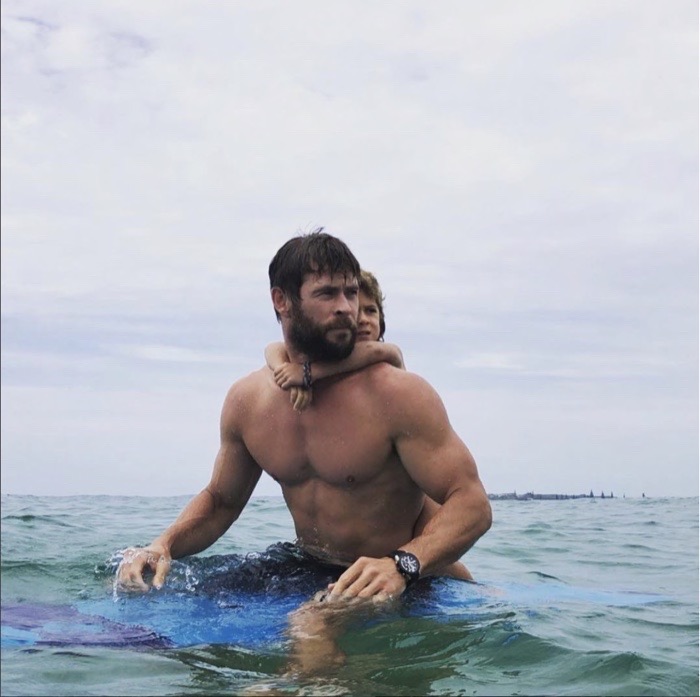 Chris Hemsworth is true to his roots – He loves Australia!

The Thor: Ragnarok actor took to Instagram to share a series of shots and videos of his camping trip with wife Elsa Pataky and their three children India and twins Tristan & Sasha.

In one shot, Hemsworth is seen looking into the distance while on a surf board in the water with one of the twin boys.

“On the hunt for some barrels with my little surf coach 🤙🤙 thanks for the photo @lukemun,” he captioned the shot.

He also posted a photo, inwhich, he is barbequing outside their trailer while Pataky roasts marshmallows with their kids.

Camping adventures in @australia killing on the bbq!!

Hemworth is the official ambassador for Tourism Australia.
During Super Bowl LII, he appeared in a “Crocodile Dundee”-themed commercial for Australia alongside actor Danny McBride. It became the first-ever tourism spot to air during the game.
Hemsworth and his family currently reside in Byron Bay, Australia.

>“I just needed to show it to her. I just needed to bring her here and then it was hard to get her to leave,” he told BW magazine of convincing his wife to move, while adding, that Los Angeles could feel ‘suffocating and overwhelming’ as everyone they met was in the showbiz industry. “Living here, or anywhere in Australia, people do all sorts of different jobs and professions. And then there’s the people, the laid-back, warm, welcoming attitude is something my wife instantly responded to and that I wanted my kids to embody, I wanted my kids to be influenced by that sort of attitude as well.”

The who was born in Melbourne, married Pataky in 2010.
Continue Reading