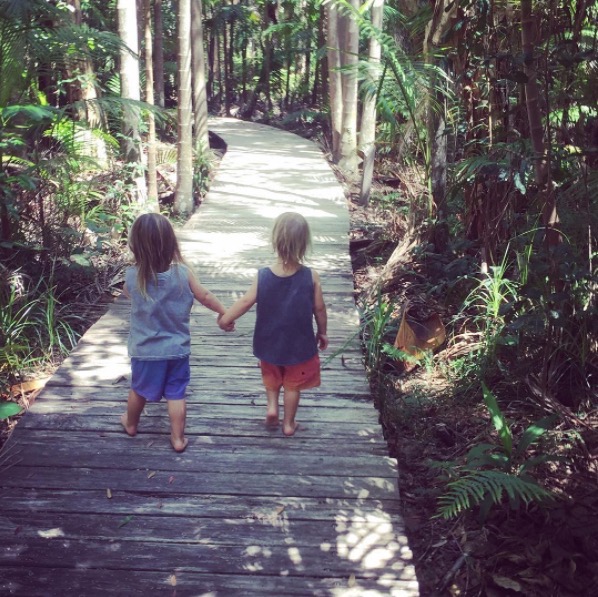 Chris Hemsworth took to his Instagram account to share a sweet shot of his twin sons, Tristan and Sasha while enjoying a day in Byron Bay, Australia on Monday.

In the photo, the 2-year-old twins are seen holding hands while walking a pathway in a forest setting.

“My son said to his brother “Tristan hold my hand so you don’t get eaten by a crocodile” #mykids #littlelegends @australia #byronbay,” Hemsworth captioned the image.

The Australian native and his family recently returned to the country from the United States, where he was filming the upcoming Avengers film for the last four months.

Hemsworth and his wife Elsa Pataky decided moved their family to Australia to avoid the paparazzi of Los Angeles.

“I lived in L.A. for seven or eight years, but once I had kids, it got more difficult to get around with the paparazzi being there, and I wanted a more laid-back life for my family. Although I grew up mostly in Melbourne, we live in Byron Bay, a quiet town on the country’s east coast, which is one of my favorite spots on the planet. The beach is beautiful, and we wake up every day to views of the ocean in front of us, but there’s also a big farming community with lots of farmland and tropical rain forest. My wife and I went on a holiday there and fell in love with the area and chose to make it our home. Now, we have a chilled-out existence,” he recently told during a Tourism Australia event.

The actor and Pataky are also parents to 4-year-old daughter India.