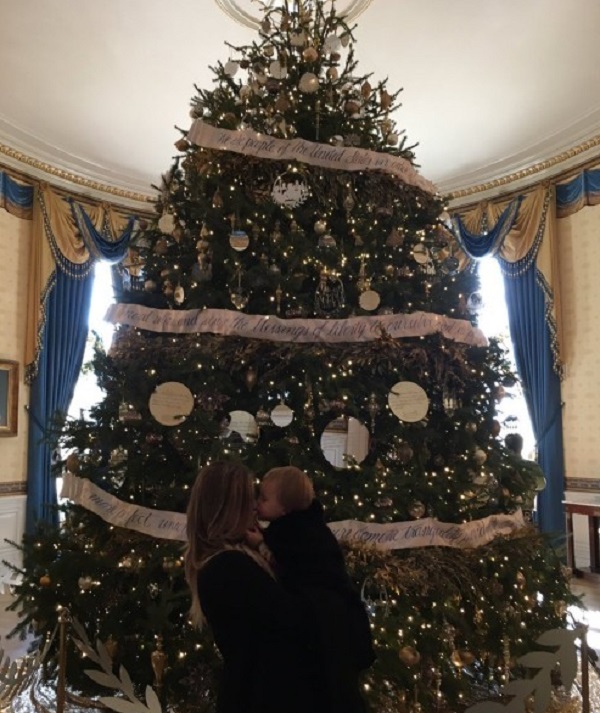 Country music singer and American Idol icon Kelly Clarkson spent the week in Washington, DC with her beautiful family for the Christmas Tree Ceremony.  Kelly Clarkson was invited to DC to sing during President Obama’s last Christmas Tree Lighting Ceremony, Clarkson has made it pretty clear on social media that she is a huge fan of the President.  And, the talented singer and mom of River Rose and baby Remington, shared some sweet family snapshots during her trip to the White House.

After the Christmas tree lighting ceremony, Kelly Clarkson tweeted a sweet photo of herself and her daughter River Rose posing in front of the iconic White House tree.  Kelly captioned the picture, “So this happened yesterday at the White House with my little girl #RiverRose I can’t handle it. It was her idea. She’s getting a pony.”

Clarkson also shared another family photo from their hotel room in Washington DC.  In the sweet picture, Kelly’s step-son Seth [Brandon Blackstock’s son from a previous relationship] is playing with his little sister and brother, River Rose and Remington.  Kelly captioned the cute pic, “3 of our kiddos playing in the hotel room. When they’re not breaking/spilling something I’m cool with anything 😂 #WhiteHouseTrip #DC they all met POTUS & FLOTUS. Seth had a full on conversation with POTUS and he’s still on cloud nine 😊 #CanWeKeepObama.”

It looks like Kelly Clarkson and her family had a blast in Washington DC, and hanging out with the President, and they certainly have the Christmas spirit.  We can’t get over how fast 2 year old River Rose is growing up!

3 of our kiddos playing in the hotel room. When they’re not breaking/spilling something I’m cool with anything 😂 #WhiteHouseTrip #DC they all met POTUS & FLOTUS. Seth had a full on conversation with POTUS and he’s still on cloud nine 😊 #CanWeKeepObama 😩