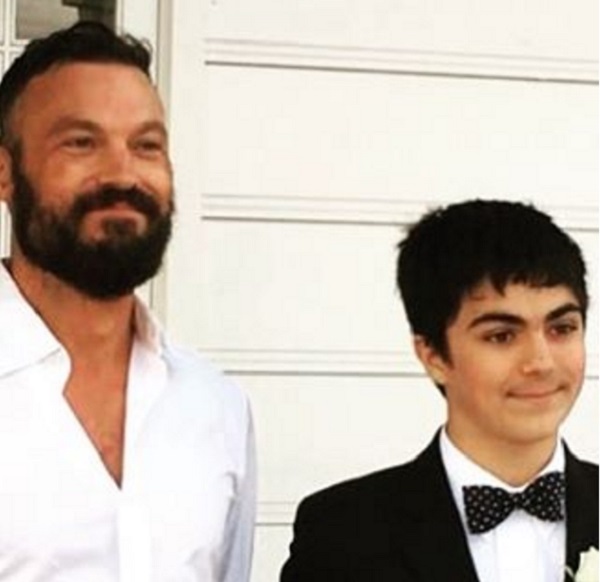 Brian Austin Green has three beautiful kids with his wife Megan Fox, the couple just welcomed baby Journey River Green to the family in August 2016.  But, Brian also has a son from a previous relationship with former co-star Vanessa Marcil, and we can’t believe how grown up he is!

This week Brian Austin Green shared a rare photo on Instagram of himself posing with his son Kassius Lijah Marcil-Green, and he looks all grown up!  Kassius’ proud dad captioned the photo, “Kass and I.”  In the picture the 14 year old is posing next to his dad and smiling ear to ear – they are almost the same height!  Kassius is sporting a bow-tie, and looks pretty dapper.

Kassius Marcil-Green’s mom Vanessa Marcil is well known among daytime soap opera fans.  His mother Vanessa starred on General Hospital as Brenda Barrett for many years, and was one half of a GH super couple with Maurice Benard’s Sonny Corinthos.  Recently she shared a photo on social media and revealed that she is working on a new movie.  The photo gave her followers quite a scare, she was lying in a hospital bed with a broken arm and broken leg.

Now that Kassius is a bit older, we’re sure he is embracing being a big brother to his father’s little ones with his step-mom Megan Fox.  After the birth of their first child Noah, Megan joked in an interview that Kassius wasn’t too impressed with his new sibling and would rather just play video games.

Do You Want to Build a Gingerbread Man Craft?