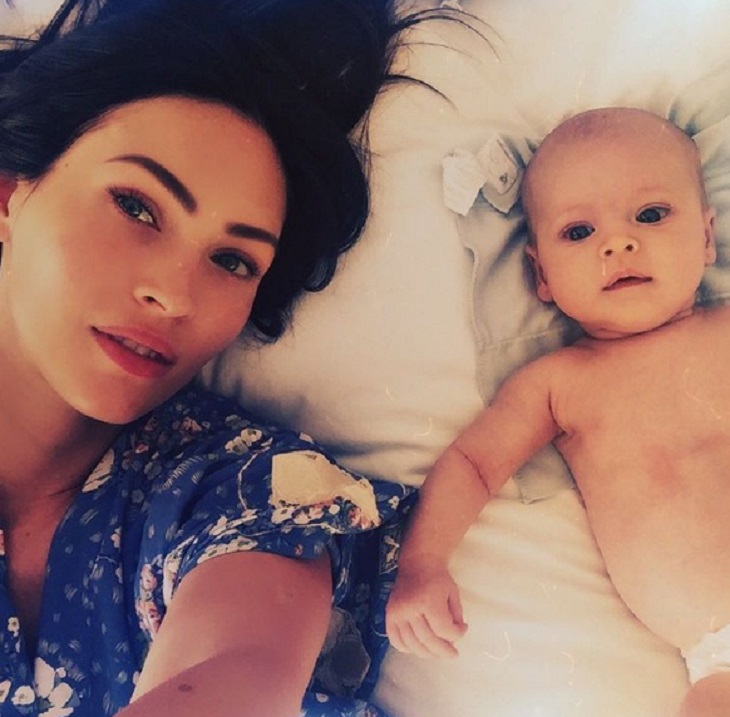 Megan Fox shared the first photo of her beautiful baby boy, Journey River Green on Instagram today, Wednesday October 26.  Megan gave birth to baby Journey on August 4 2016.  Since the birth of her third son, the Ninja Turtles actress has been mum on social media, until today.  Megan posted an adorable photo of her lying next to baby Journey – and he is so sweet!

Early in 2016 Megan Fox and Brian Austin-Green announced that they had split and were filing for divorce.  Soon after the couple seemingly had a change of heart and reconciled after Megan learned she was pregnant with baby number three.  Throughout her pregnancy, Megan was spotted out and about with her two boys and husband Brian on numerous occasions, and they appeared to be a picture perfect family.

Megan Fox is seriously outnumbered in the Green household, and the actress is now living four boys!  Megan and Brian Austin-Green welcomed their first child Noah Shannon in 2012, and their 2 year old Bodhi Ransom came along in 2014.  Now, they have added 2 month old Journey River to their brood of boys.  Plus, Brian has another son from a previous relationship, a teenager named Kassius.

In the final months of Megan Fox’s pregnancy, she appeared on Jimmy Kimmel over the summer.  The actress had some interesting things to say about unborn baby Journey.  According to Megan, Journey was communicating with her from the womb.  The actress explained, “You don’t hear an audible voice, but I feel like you receive messages from the child if you’re open to it.  For instance, this baby wanted me to live somewhere else, so we’re moving to a whole different place in Los Angeles because I feel like that’s where this baby wants to be raised.”