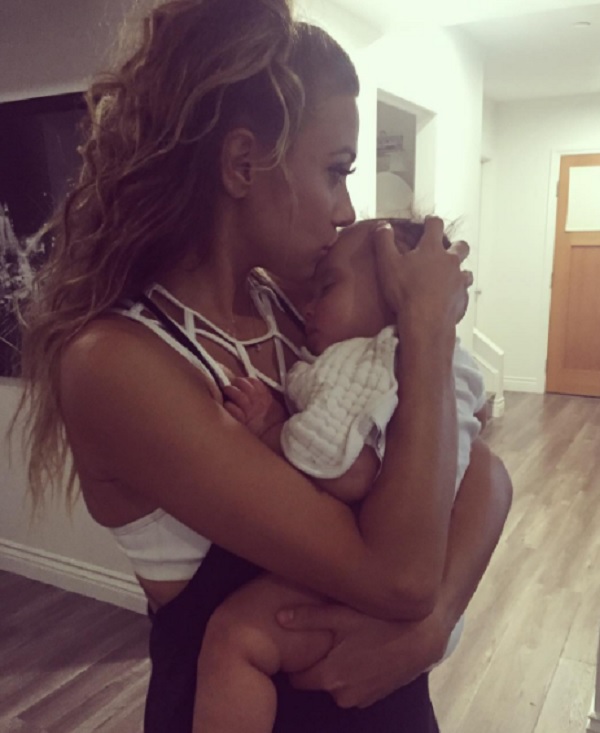 Jana Kramer is well known for her acting and singing resume, and her current stint on Season 23 of Dancing With The Stars.  When she isn’t Cha-Chaing across the DWTS stage and working on her music, she is also a mom to an adorable baby girl.  Jana gave birth to Jolie Rae Caussin in January 2016, and she is currently a busy single mom, she and Jolie’s dad Mike Caussin split in August 2016.

Jana is currently competing live on the ABC dance competition, Dancing With The Stars.  The popular country music singer is actually doing very well in the competition, and is paired up with pro dancer Gleb Savchenko.  Last night Jana and Gleb won immunity for the week with their impressive jive dance.  After DWTS aired, Jana rushed home to spend some time with her baby girl Jolie and shared a sweet photo on Instagram.  Jana captioned the adorable snapshot, “I got home in time to see my girl. Sweet dreams my little angel.#mygirl #mystrength.”

In Jana’s recent People Magazine blog about Dancing With The Stars, she revealed that despite how well she has been doing, she is super nervous.  The singer explained, “Now we’re in week 3 and I’m feeling a little better even though rehearsals went badly late last week as we only had a few hours to practice – and the jive and I don’t get along. For tonight’s dance, fans can expect to see really fast movements and high energy. I’m nervous – I’m really nervous!”

Have you been watching Jana Kramer on DWTS?  Do you think she could be this season’s winner?  Let us know!