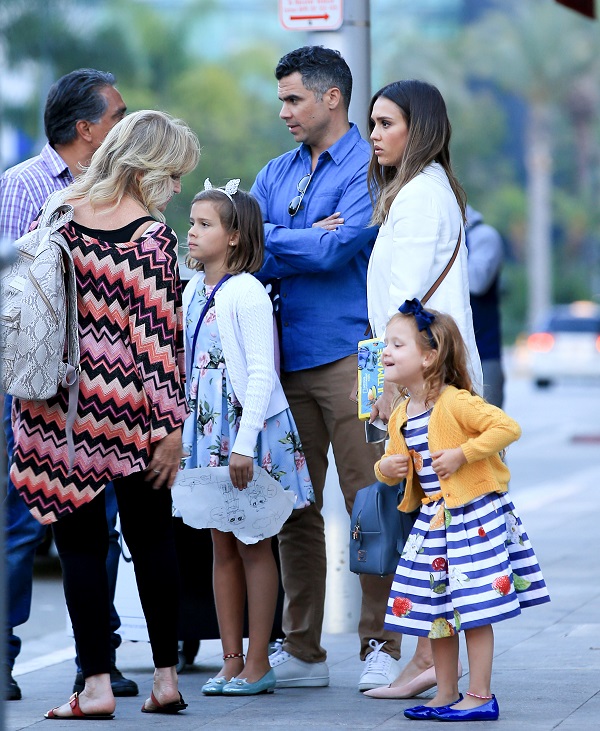 Jessica, Cash, the birthday girl, and Haven were spotted having a celebratory dinner at Bouchon in Beverly Hills, California, with Alba’s parents in tow.  Honor was dressed for the occasion in a pale blue dress with floral print and a white sweater.  Her sister Haven wore a striped dress, also adorned with a flower print.  They were absolutely adorable!

It’s hard to believe that little Honor Marie Warren is already 8 years old, it seems like just yesterday Cash and Jessica announced that she was pregnant with baby number one.  And, Honor is a spitting image of her beautiful mother!

On June 7th Honor’s proud mom shared some personal snapshots of her daughter’s birthday celebration on SnapChat, including a photo of Honor and her sister  posing with her birthday balloons before they headed out to dinner.  Jessica also posted some photos of Honor’s birthday gifts, which included an apron for her cooking lessons, some Monster High toys, a magnifying glass, a bug encyclopedia, and a Bat Girl costume.  It sounds like Honor Marie is one interesting kid!

It was a big week for the Warren Family.  Earlier this week they also attended an event at Au Fudge to support Cash’s “Pair of Thieves” event in West Hollywood.