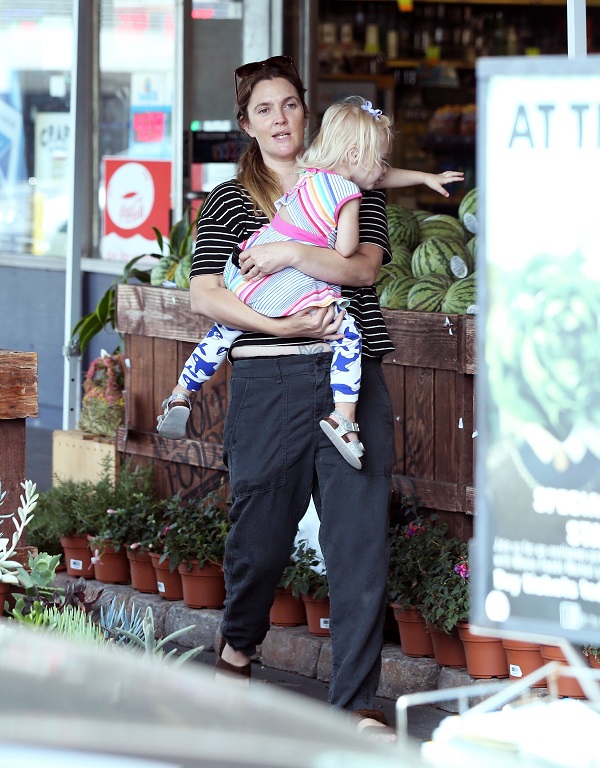 Even A-List celebrities have to do a little grocery shopping once in a while.  Drew Barrymore was spotted picking up some items on her shopping list at Whole Foods on Tuesday June 28 in Hollywood, California.  The actress and mother was dressed casually as she pushed her daughter Frankie Barrymore Kopelman in the shopping cart full of bags.

Little Frankie is the youngest of two children that Drew shares with her ex Will Kopelman.  Olivia was born on September 26, 2012.  Then 2 year old Frankie came along on April 22, 2014.  Earlier this year Drew Barrymore and Will Kopelman announced that they had split and were filing for divorce.  Regardless of their separation, the two parents are often spotted spending time with their girls, they seem to be handling co-parenting rather well.

While Drew Barrymore was out taking care of her mom duties and shopping at Whole Foods, the internet was buzzing over her possible talk show.  Yesterday news broke that Drew was in talks with Warner Bros. to helm her own talk show, and according to the report from Variety, Ellen DeGeneres would serve as her executive producer.  Right now, there is nothing official or concrete, but we would definitely tune in to Drew Barrymore’s show!  Hey, maybe Frankie and Olivia could be her co-hosts!

Drew Barrymore does an amazing job juggling her career and motherhood.  When she isn’t taking care of her girls, the actress is churning out hit movies, working on her own fashion company, and she also just filmed a guest appearance on Bravo’s series “Odd Mom Out.”  Drew’s episode is set to air on Bravo on July 25, set your DVR’s!