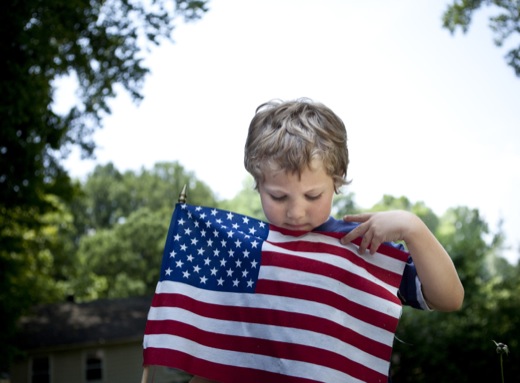 National Flag Day did not formally start until 1916, but its activities were taking place before then. It all started when a young teacher placed a flag on his desk in 1885 and asked children to write an essay about it. Today National Flag Day exists to remind children of the history of the flag as well as the proper ways to respect it.

As a family you can celebrate and educate all at once. Start off by talking to your kids about what National Flag Day is. Tell them the story of how the flag was made and teach them the songs that honor the American flag. This is also a good day to make sure your flag is in good repair. If you have one that has seen it’s better days, take it to a place that disposes of them properly like your local American Legion.

Bake a cake to celebrate National Flag Day. You can buy decorative items to put on it or draw your own on with icing. Either way, it can serve as a reminder of what the day means. You can even make a flag out of a collection of cupcakes!

Don’t forget to play some fun games on Flag Day. One very simple, but educational and fun game is to name the flag. Use your computer to show different flags and ask your children what country or state they belong to. The one who gets the most flags right wins. You can also play “Pin the Symbol on the Flag” using construction paper. Show the children a picture of a flag and give them the symbols to pin on it. Play just like Pin the Tail on the Donkey.

If you are looking for something a bit more physical, try playing Capture the Flag or Flag Football. Capture the Flag is played when teams try to get the flag from the other team. You can play with one team having a flag or both. The idea is to put the flag somewhere and have the other team try to capture it to win the game. Players can get tagged and be “out” until one of their team members gets to tag them back “in”. Flag Football is played like normal football, but grabbing a player’s flag is the same as tackling him or her.

Make National Flag Day as fun as you can so your children are more willing to participate in it. Over the years you can build quite a bit of information and history about the various flags of the world while honoring your own on Flag Day.