Alessandra Ambrosio Out And About With Noah 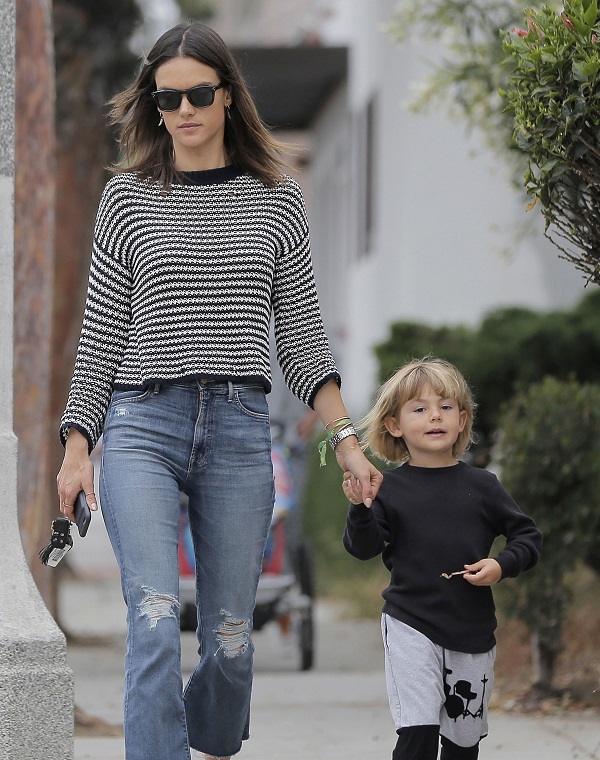 Victoria’s Secret model Alessandra Ambrosio spent some quality time with her handsome little son Noah on Tuesday May 31 in Santa Monica, California.  The mom of two was photographed enjoying the sunny California weather and walking the Santa Monica streets with 4 year old Noah, and he is growing up so fast! The happy tot just turned 4 years old this month, he celebrated his birthday on May 7.

Alessandra Ambrosio just returned to California this week after attending the Louis Vuitton Fashion Show in her native country of Brazil.  Both of Alessandra’s children were actually born in Brazil as well.  Alessandra began dating her husband Jamie Mazur in 2005, their first child Anja Louise Ambrosio Mazur came along 2008.  And, then Noah Phoenix Ambrosio Mazur was born in the Spring of 2012.

For a mother of two, Alessandra Ambrosio is in GREAT shape these days.  The Brazilian model recently opened up about pregnancy and its effects on her body in an interview with The Edit.  34 year old Ambrosio dished, “Your body will never go back to exactly what it was before pregnancy, whatever people tell you. It can’t.”  Alessandra went on to say that she thinks she has a better body now than she did BEFORE having her two children!

Alessandra and her kids have had a busy year so far, between jetting back and forth to Brazil they managed to find time to go to Disney World in March and Ambrosio took them along with her to Coachella in April.