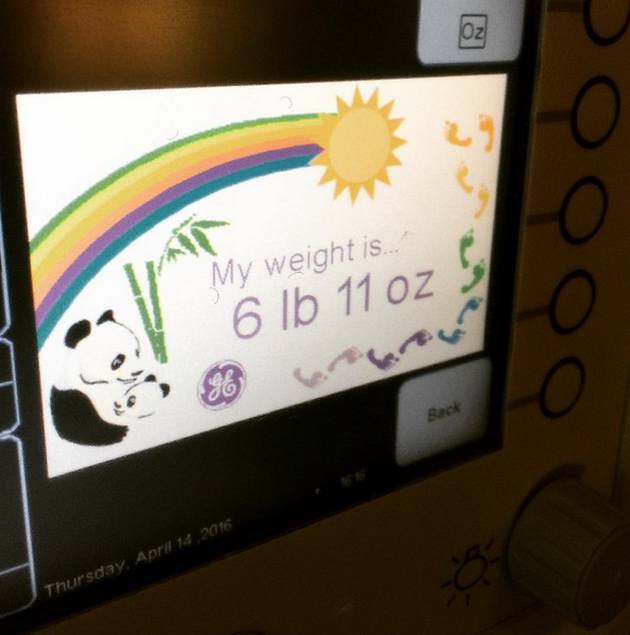 Chrissy Teigen has given birth to John Legend’s daughter, Luna Simone Stephens and shared a photo! The proud new celebrity parents made the announcement on Sunday April 14, 2016. Both the celebrity mom and baby are doing well. Congratulations!

Chrissy, was first to share the happy news of welcoming little Luna by tweeting, “She’s here! Luna Simone Stephens, we are so in love with you! And sleepy. Very sleepy!” The model and TV host also shared a photo of her baby’s weight. Little Simone is just 6 lbs 11 oz.

John followed Teigen’s announcement with a tweet of his own sharing, “Our new love is here! Luna Simone Stephens, born on Thursday, the 14th. We couldn’t be happier!” Chrissy Teigen also still has her great sense of humor. The new author followed her tweets with the joke, “To everyone asking, john is healing perfectly” and later added, “Thank you for all the well wishes!!! we are so happy and excited! i dunno what to tweet now. does my twitter change? this is so awkward.”

Chrissy Teigen and John Legend’s journey to have a baby has been tough for the couple. Chrissy opened up about her and John’s struggle to conceive, and spoke candidly while on FABlife. “John and I were having trouble. We would have had kids five, six years ago if it had happened. But, my gosh, it’s been a process.” While she wanted to share her frustrations with her legion of supports, Teigen felt that it was better to keep things private explaining, “I wanted to talk about it for so long.” Chrissy also confessed the admission of undergoing IVF wasn’t something she had intended on sharing on the daytime talk show. “It didn’t feel right to ever tweet, ‘Ugh, doing my IVF shots again.’ It just sounded silly. It definitely was not planned in that episode at all.”