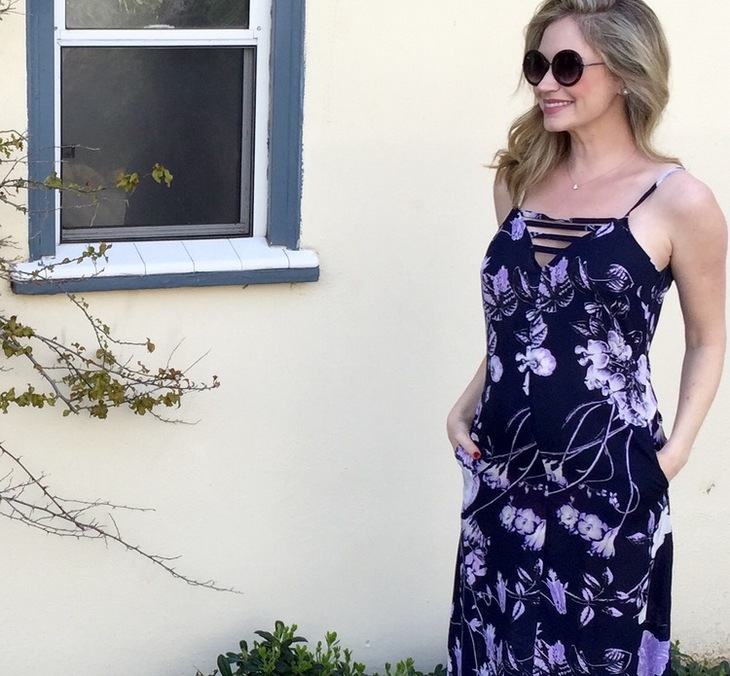 ‘General Hospital’ Ashley Jones [Parker Forsyth] is expecting her first child with hubby Joel Henricks. The actress, who was formerly Bridget Forrester on ‘The Bold and the Beautiful’ recently opened up about her pregnancy, her baby shower and much, much more.

Ashley’s baby shower is quickly approaching, it will be held the first weekend in April, and the mom-to-be admits she was a little panicked about what to wear. As Ashley calls it – dressing the bump. Ideally the actress wanted a fitted maxi maternity dress.

You Might Also Like: ‘General Hospital’ News: Emme Rylan Learns To Make Homemade Playdough – Enjoys A Day With The Boys

Does such a dress even exist? No, not really, but Ashley did find a fitted maxi that worked and she can wear it after Baby Henricks arrives next month. In her latest blog entry ‘Shower Dress! What To Dress The Bump??’ Ashley shared a photo of the dress she discovered.

The dress is a dark blue-violet color with a lilac-white floral print. Best of all it has pockets and a gorgeous V-cut back. Even better, it was affordable at only $52 and Ashley Jones will be able to wear it after the baby arrives.

In a previous blog post Ashley Jones talked about the changes her body is going through during her pregnancy. “I’m having to learn to relinquish so much control. The obvious loss of control: my body change. The less obvious: the unknown. Right now, so much of life is up in the air. And the only thing I know for sure is – for sure more change is coming.”

Ashley also opened up about her new role on ‘GH.’ She especially thanked the wardrobe department for helping her feel comfortable in her clothes. Shawn Reeves, head wardrobe designer at ‘General Hospital’ advised Ashley to embrace her bump! Most recently Ashley loved the jacket that helped her hide – wait, embrace! her baby bump.

It’s amazing how much can change so fast. For Ashley Jones life has been a whirlwind of new experiences. Ashley has taken on the challenging role of Parker Forsyth on ‘GH,’ was secretly married, became a stepmom and now is expecting her first baby. That’s a lot of change all at once, but the actress seems to be balance everything just fine.

The Bold and the Beautiful Star Ashley Jones Gets Real About Life, Love, Loss and…