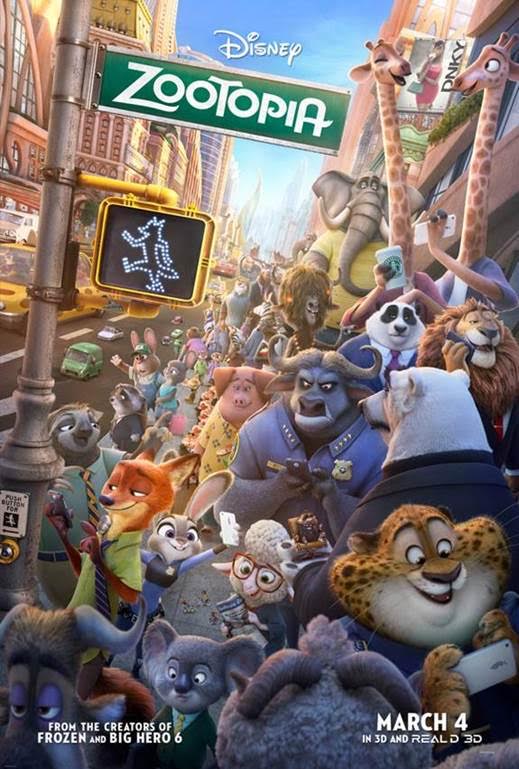 Zootopia, the latest feature film from Walt Disney Animated Studios, is a place where no matter what you are—from the biggest elephant to the smallest shrew—you can be anything. When rookie officer Judy Hopps arrives, she discovers that being the first bunny on a police force of big, tough animals isn’t so easy. Determined to prove herself, she jumps at the opportunity to crack a case, even if it means partnering with Nick Wilde—a fast-talking, scam-artist fox—to solve a mystery.

Are your children eagerly waiting for Zootopia‘s March 4th release? If so, their in luck because Walt Disney Animated Studios just released three new short clips of the film on the internet.

“Clawhauser is very upbeat. His is the first face you see when you enter the ZPD. He’s surrounded by big, tough cops, but unlike the fast, lean cheetah we might expect, Clawhauser loves his sweets. Donuts, candy, carbs—he’s always munching on something. So we ended up with this great dichotomy of a chubby cheetah,”  director Rich Moore tells.

In ‘Have A Donut’, everyday life in Zootopia is featured while ‘Judy Hopps’ chases a criminal through the city.

Did you know Zootopia is comprised of neighborhoods that celebrate different cultures? There’s ritzy Sahara Square for desert animals, Tundratown for the polar bears and moose, the hot and humid Rain Forest District, Little Rodentia for the tiniest mammals, and Bunnyburrow for the millions and millions of bunnies. The downtown area, Savanna Central, is a melting pot where a wide array of mammals from every environment come together.

In the last clip, ‘Assistant Mayor Bellwether’, the sweet sheep with a little voice and a lot of wool helps Judy and Nick in a investigation by search the traffic of a district via the city computer. Bellwether is excited to help because she constantly finds herself underfoot of the larger-than-life ‘Mayor Lionheart’.

“She’s small in size, vulnerable, uncomfortable and a bit passive aggressive,” says director Byron Howard. “She’s the perfect contrast to the booming mayor. But she tends to get the short end of the stick, or staff in this case.”