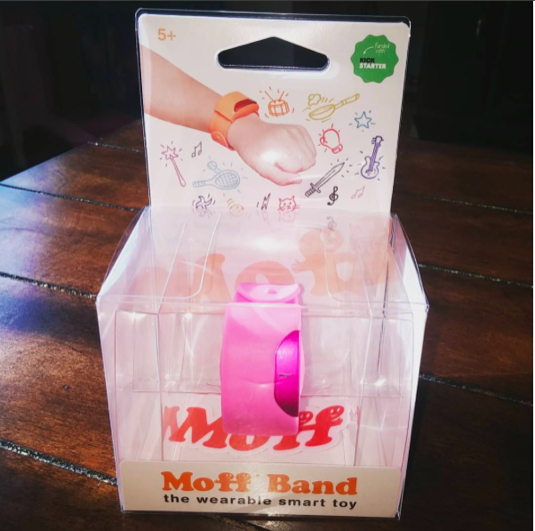 When the holidays roll around, it can be tough to know exactly what to give the little guy or gal in your life. I mean there are so many choices, how do you choose just one? I want to introduce you to something my daughter Ava fell in love with this year. It’s called the Moff Band and basically it’s a wearable smart toy. In a nutshell, your child makes movement and the Moff Band makes awesome sounds. The more your child moves, the more realistic sounds they will hear with each movement. For example- If Ava moves her arm, she might experience a whisk sound from a Tennis racket.

The sounds are able to be changed and chosen through the Moff app. The app is downloadable on your electronic device. It’s a free app that allows your child to use their imagination and it allows play to come alive. The free app connects to your child’s Moff via Bluetooth.

I’ll walk you through a step by step on how the Moff realistically works.

The Moff Band is considered something that works because kids actually move around when they wear this band. The wearable toy is encouraging kids to move! Movement is essential to a healthy lifestyle, so it only makes sense why kids who use it on a daily basis are getting healthier and healthier.

The PBS KIDS Party app is available now for free download on both Apple and Android smartphones and tablets. The Moff Band is available in three colors — blue, pink and orange — at a retail price of $54.99 on Amazon. More info on the app is here: http://to.pbs.org/1l7CKi5.

Disclaimer: Celeb Baby Laundry has not received any payment as a result of this feature. I received a sample in order to facilitate this review. All opinions are our own.