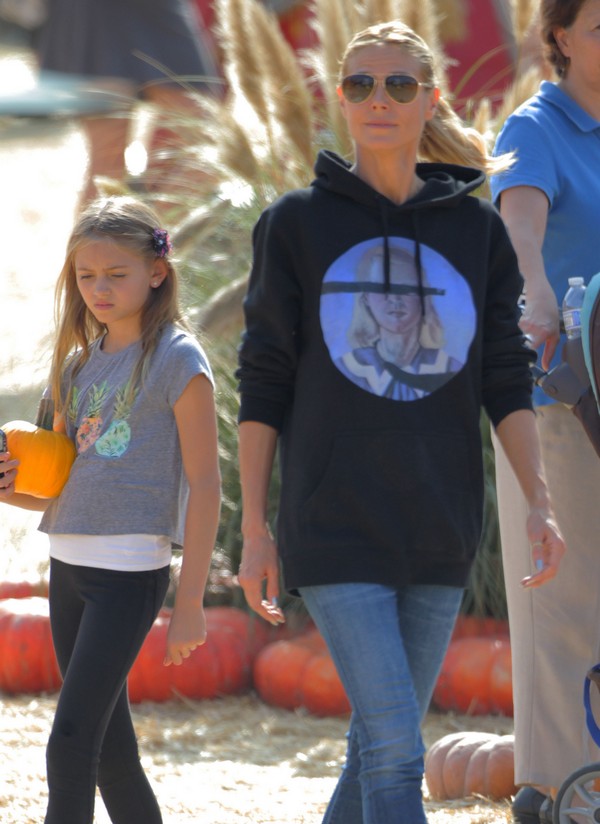 Heidi Klum and her mini me daughter, Leni, enjoyed some mother-daughter time during a pumpkin patch adventure. The ‘Project Runway’ star and her 11-year-old hunted for the perfect pumpkin at the Mr. Bones Pumpkin Patch in Culver City, California.

Heidi and Leni spent the morning enjoying a soccer game with the rest of the family; Lou, 6, and sons Henry, 10, and Johan, 8. Klum and her oldest daughter, had fun at the pumpkin patch. Armed with her smartphone, Leni took a picture of her mother being silly and putting the pumpkin on her head at one point. It’s good to know that Heidi has a great sense of humor.

Recently, Heidi spoke to Redbook about parenting and how being a mom often involves the task of being a dad, too. “Women are capable of juggling a lot of balls – we do things that guys just cannot do,” Heidi Klum explained. “Men typically can juggle only one ball, and even then they’re like, ‘I’m confused. Should I put it in my right or left hand?’ A lot of them have a very hard time just trying to figure out what to do with that one ball. And often they want us to hold that one too!”

Do you agree with Heidi Klum? Let us know your thoughts in the comment section below!