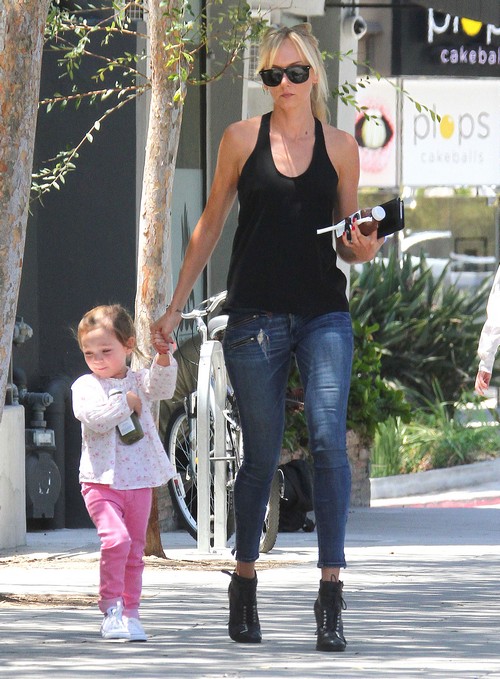 Rod Stewart’s daughter, socialite Kimberly Stewart took her almost three-year-old adorable daughter Delilah Del Toro to a juice bar in Los Angeles, California on July 21, 2014.  It is clear that Mommy Kimberly is already teaching Delilah how to make healthy choices opting for juice rather than chocolate.  Delilah was so excited to get her juice she tried biting off her juice bottle cap.

Delilah’s father is Academy Award winning actor Benicio del Toro but Benicio and Kimberly are not in a relationship.  Benicio has always been verbal about not wanting to marry saying, “It’s like, ‘F**k! Why do I have to get married? Just so I can get divorced?'”   Although Kimberly and Benicio are not in a relationship, Kimberly has always said that Benicio plays an important role in Delilah’s upbringing.

Kimberly, 34,  was dressed casual chic for the outing in tight blue jeans, black laced booties and a black tank top.  She accessorized the look with dark sunglasses.  Little Delilah was pretty in pink jeans, pink flowered top and Converse sneakers.