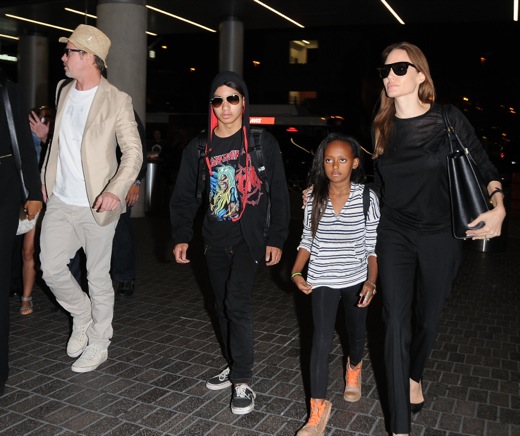 Brad Pitt & Angelina Jolie were seen catching a flight out of LAX airport with their children Maddox and Zahara in Los Angeles, CA on Friday (June 6).

The 12 Years a Slave actor looked like a yummy daddy wearing a white t-shirt over an undershirt that looked like it had a drawing of him and Angelina done by one of their kids. He paired his look with cream khakis while Jolie wore her signature black ensemble.

The actress recently revealed the travelling she does in her work with the United Nations has stopped her worrying about her own problems and made her appreciate the things she has.

“I’d been through a period where I was more concerned with my own problems and pain. Then I travelled to places where there were landmine victims, I went to my first war zone, to places where you see people in real need,” she told. “You meet people who don’t even know where their parents are, or their children, and they haven’t got enough food. And you wake up in a moment, you realise how fortunate you are that your concerns are nothing in comparison.”

Cindy Crawford Hangs Out With Her Little Models