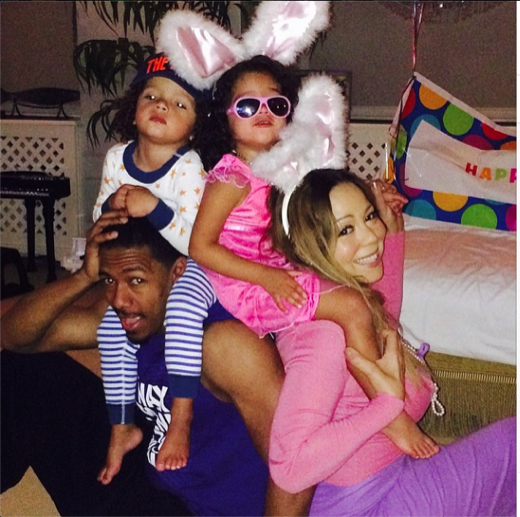 Happy Easter from the Carey-Cannon Family!

“Happy Easter!!!!” the #Beautiful singer captioned the photo in which her 3-year-old twin daughter Monroe sits on her shoulder while they wear matching bunny ears and outfits. Similarly, Moroccan sits on his daddy, Nick Cannon‘s shoulders. shoulders.

Carey recently revealed that she never saw herself as a mother before having children.

“I remember being a little girl and going, ‘I don’t think I’m going to have babies when I grow up’ . . . for a while I was probably convinced of that, and I just realized things change and that’s what happens,” she told E! Canada.

Meanwhile, Carey’s children will appear on the track Supernatural from her upcoming album.

A release date was set set for May 6, but rumours are that it will now hit stores at a later date.

Happy Easter From Our Family!