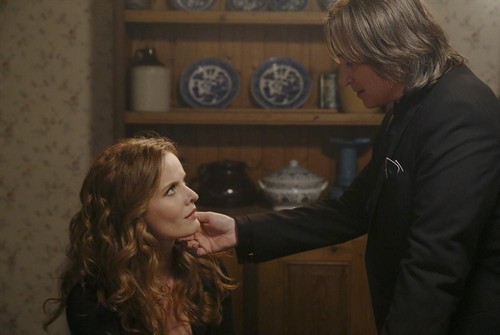 Our favorite fantasy drama ONCE UPON A TIME IN WONDERLAND returns tonight to ABC with a new episode called, “Bleeding Through.”  On last week’s episode Ariel returned to Storybrooke and plead with Hook to help her find Prince Eric, who never returned to the town when the new curse was invoked. Emma agreed to let Regina teach her how to use magic so that she could help defeat Zelena, and Mary Margaret and David tried to prove that they could be just as much fun as Hook is with Henry — who thought they were boring.

Meanwhile, in Fairy Tale Land during the past year, an angry Ariel confronted Hook over her missing Prince Eric, who she assumed was kidnapped and possibly killed by the swarthy pirate.  But when Hook confessed that the Jolly Roger had been stolen and Eric was most likely the thief’s prisoner, Ariel unknowingly provided him with a clue as to who the culprit was, and Hook – with Ariel in tow – went off in search of his ship. Did you watch last week’s episode? We did and we recapped it right here for you.

On tonight’s episode, after Zelena steals Regina’s heart, Regina casts a spell so that she can speak across the realms to her dead mother, Cora, to discover the truth about why she abandoned Zelena, and Belle stumbles across what Zelena’s ultimate end game is. Meanwhile, in the Fairy Tale Land that was, young Cora is duped by a man claiming to be a prince and finds herself alone and pregnant. But a chance meeting with a real prince could lead Cora to the royal life she’s always craved, but she must keep her pregnancy a secret or risk losing everything.

Tonight’s season 3 episode 18 looks like it is going to be as magical as ever so make sure that you tune in and also join us for our coverage for ABC’s hit show at 8:00 PM EST! While you wait for our live update hit up the comments section and let us know what you think of the episode!

ONCE UPON A TIME SEASON 3 EPISODE 18 RECAP, CLICK HERE …