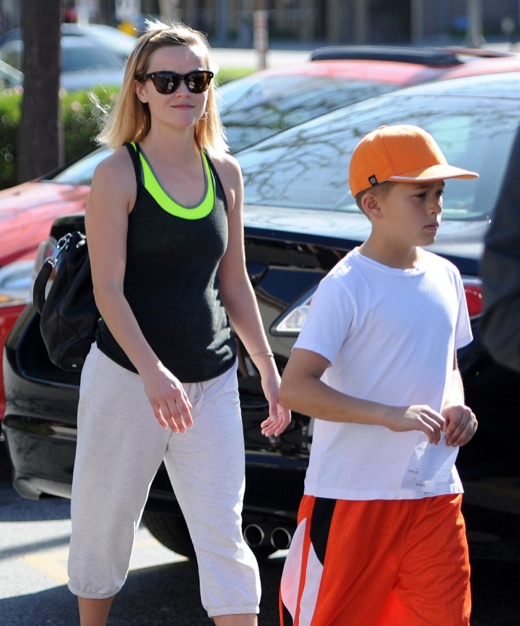 Reese Witherspoon and her son Deacon Phillippe were seen leaving a gym after a workout in Brentwood, CA on Sunday (March 16).

The Mud actress wore a workout tank with above the ankle sweat pants while smiling at the photographers taking her picture. Deacon walked ahead in a white shirt and basketball shorts.

Following in friend Gwyneth Paltrow‘s footsteps, Witherspoon is in the early stages of starting her own lifestyle company.  The venture which is scheduled to launch in 2015, will emphasize her southern roots and personal style.

The mom-of-three is also set to produce alongside Lionsgate an adaptation of the upcoming young adult trilogy, The Outliers.

The books by Kimberly McCreigh, centers on a young woman who’s best friend goes missing and turns up in a remote spot in the woods with a group called the Outliers, who claim to be able to harness “intuition” and turn it into a powerful psychological weapon. She joins the Outliers but soon finds herself running for her life.

The first book hits bookstores in 2015.

Smart Tricks to Save on Baby Gear