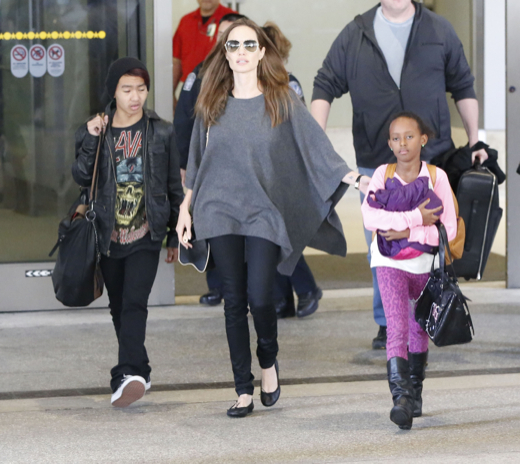 Angelina Jolie was spotted exiting LAX with her children Maddox and Zahara after arriving on a flight in Los Angeles, CA on Saturday (March 29).

The Maleficent actress wore an oversized grey sweater, black skinny jeans and matching flats. With their bodyguards following behind, she guided the children who both carried bags from their trip to a waiting car.

Jolie was returning from Bosnia where she paid tribute to the victims of the 1995 Srebrenica massacre alongside the British foreign secretary, William Hague.

“The use of rape as a weapon of war is one of the most harrowing and savage of these crimes against civilians,” Jolie told. “This is rape so brutal, with such extreme violence, that it is even hard to talk about it,” said the goodwill ambassador for the UN refugee agency (UNHCR).

While in Europe, she also praised her fiance Brad Pitt for his parenting skills.

“Brad is always encouraging me and willing to assume a lot of the parental duties,” she gushed. “He loves being a father and that’s one thing I’m most proud of about him. With a large family, you need that support. Brad is a wonderful teacher and guide, for the boys in particular.”

“He is a very hands-on father and he loves to make breakfast and drive them to school in the mornings.”

Jolie can next be seen in Maleficent, the untold story of the iconic villain from the 1959 classic Sleeping Beauty.

The film hits theatres on May 30th.

Reese Witherspoon & Her Sons Touch Down in Miami