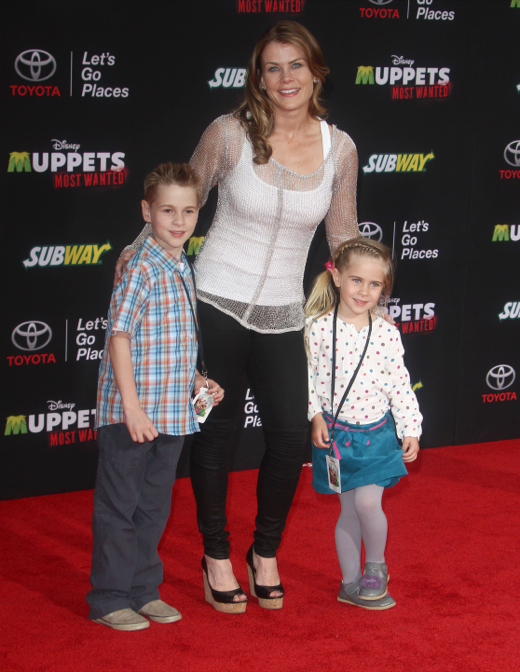 Alison Sweeney took her children Benjamin and Megan to the premiere of Disney’s Muppets Most Wanted at the El Capitan Theatre in Hollywood, California on Tuesday (March 11).

The Biggest Loser host wore a see through top over a white tank with black skinny jeans and espadrilles. She posed with her children who smiled happily at the photographers taking their picture.

In an exclusive interview with Celeb Baby Laundry in 2012, Sweeney described the best thing about being a mom as “everything” while insisting balance is the key to juggling her busy career with motherhood.

“Balance is the key. It’s tough because we have long shoot days sometimes or occasionally I have to travel for the show. But I do the best I can to balance out my work time with my family time, and if I have a really heavy work week, I make it a point to stay home on the weekend, and really give the kids my attention. We have a lot of quality family time together. And it all balances itself out in the end,” the star told.

In Muppets Most Wanted,  the gang goes on a global tour, selling out grand theaters in some of Europe’s most exciting destinations, including Berlin, Madrid and London. Unfortunately, they find themselves unwittingly entangled in an international crime caper headed by Constantine—the World’s Number One Criminal and a dead ringer for Kermit—and his dastardly sidekick Dominic, aka Number Two.