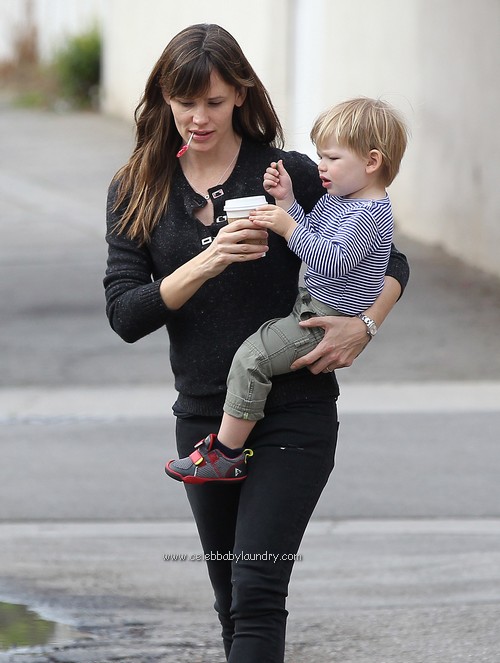 Jennifer Garner spent some quality time with her son Samuel Affleck at a local park in Los Angeles, California on January 24, 2014.  The two were headed to the park with Jennifer carrying Samuel and a cup of coffee and they look like they were having a great time.  When Jennifer and her adorable tot got to the park Jennifer pushed Samuel on the swing and he ran around playing in the grass.  So adorable, he sure is growing up fast.

Jennifer and Samuel’s Dad Ben Affleck were recently seen at the SAG awards where the couple wowed the crowd.  Jennifer wore her hair in a romantic upsweep and wore a strapless navy silk Max Mara custom gown on the red carpet, she looked amazing.

Jennifer was there because she was nominated alongside her “Dallas Buyers Club” co-stars for Outstanding Performance by a Cast in a Motion Picture.  The award ended up going to American Hustle.

Meanwhile, Ben will be playing Batman in the upcoming  Batman vs Superman movie.  Jennifer had this to say about Ben’s Batman costume in the movie, “I’ve seen the suit.  It’s unbelievably cool. It’s a total reinvention, it looks great.”

Woman Surfs Into 9 1/2 Months of Pregnancy