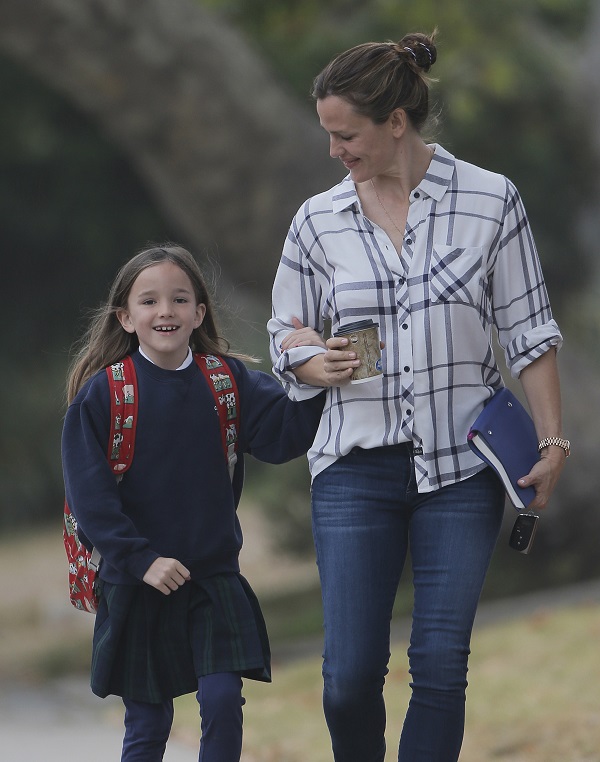 Jennifer Garner and the Affleck clan have been busy, busy the last few days!  Yesterday Jennifer Garner was spotted arriving at the LAX Airport with her three kids in tow – Violet, Seraphina, and Samuel.  The actress and her kids had just flown in from Europe where they were spending some family time with Ben Affleck.  Ben is currently on location in London, England filming his next action movie, ‘League Of Justice.’

Jen Garner didn’t let anything like a little bit of jet-lag slow her down, on Friday June 3 the actress and mom of three was spotted out and about in Santa Monica with the adorable Seraphina.  7 year old Seraphina Rose Elizabeth Affleck was wearing a super cute navy blue skirt and sported a backpack as she clutched her mom’s hand crossing the street.  Seraphina’s older sister Violet (10 years old) and younger brother Samuel (4 years old) were no where in sight during the mother and daughter outing.

Despite the media circus surrounding their family, Jennifer Garner and Ben Affleck’s kids always appear to be in good spirits when they are out with their parents.  Little Seraphina was all smiles as she made her way through Santa Monica hand-in-hand with her mother.

In an interview with US Weekly last year, Jen opened up about raising kids in Hollywood.  The actress explained that she and Ben Affleck tried to treat their kids “like normal kids.”  Garner explains that their house is just like a typical house – they play “pretend,” she leaves notes in their school lunches, and there are even temper tantrums to boot.  Sounds like a normal house to us!