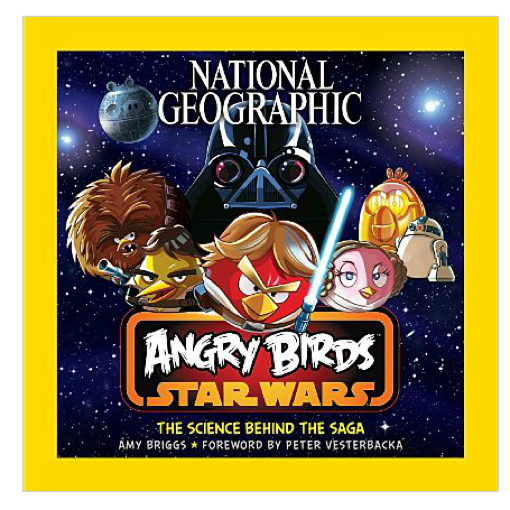 Star Wars has captivated audiences for decades, so it’s only fitting that the franchise teamed up with Rovio to create a Star Wars spin-off of the wildly popular Angry Birds game. The Angry Birds Star Wars game has introduced the classic film to a new, younger generation. The game fascinates children of all ages through the unique powers and technology in the Star Wars Universe. What kid doesn’t enjoy going on their own galactic adventure?

In National Geographic Geographic’s Angry Bird Star Wars: The Science Behind The Saga, children get to take a fun look at the key events and characters in the Angry Birds Star Wars game while learning about interesting science facts. The true science behind the science fiction components is revealed throughout the book.

We learn more about Red Skywalkers home planet of Tatooine. Hot and dusty the planet orbits two suns whose light scorches up the planet and has dried up much of the water. At one point, the planet was covered by oceans, but the surface is now covered by large deserts with sand. When looking at our own Solar System, we realize the fictional planet shares some similarities with Mars. It’s also dry and rocky, but only orbits one sun. Mars also had liquid water at one point in it’s history.

– Has man created anything similar to a lightsaber?

– Is there anything in our solar System similar to the treacherous Hoth astroid field that Hams Solo and Terebacca cleverly manuveur their Falcon through?

– Is it possible for humans to be frozen in Carbonite like Hams Solo?

There is a multitude of fun ‘force’ facts to learn on each page. For example, the first humanoid robot in space was named Robonaut 2, R2 for short. The Star Wars character R2-EGG2’s moniker is inspired by this. The Star Wars Angry Birds character also stores and retrieves information.

This is a perfect holiday gift for the kid in your life that loves all things, science and space! It can also be a great book to spark a child’s imagination about the complex solar system we live in.

Disclosure: I am part of the National Geographic Kids Insider program.  I receive special perks as part of my affiliation with this group. The opinions on this blog are my own.

Myths & Facts About Having Twins