Myths & Facts About Having Twins 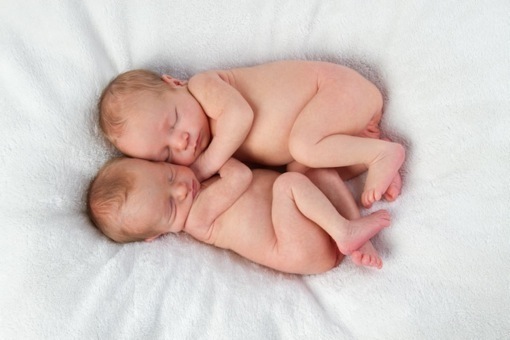 Most of the increase in twin births (about 2/3) is likely due to the growing use of fertility drugs and assisted reproductive technology. The rest is attributed to the rise in average age at which women give birth (which is thought to impact the chances of fraternal twins).

With the numbers of twins on the rise, you may have some questions. How likely are you to have twins? Can you breastfeed multiples? Do twins really skip a generation? Does it run in the family? Facts checked and myths debunked – here is a starting point on understanding twin pregnancies.

Identical twins happen when a single egg is fertilised by a single sperm to form one zygote that then divides into two separate embryos. No one knows what causes identical twins. These embryos develop into foetuses sharing the same womb. It is possible for twins to share a placenta, chorion and amniotic sac – or a combination, each with its own complications. About 1/3 of all twins born are identical.

Identical twins are genetically identical unless there has been a mutation in development. They are almost always the same gender. They generally look alike, share the same blood type, eye and hair colour. Fingerprints and teeth marks can set them apart. They develop their own personalities and differing environmental influences are believed to magnify or reduce the effect of specific genes.

Non-identical or Fraternal twins develop from two different eggs fertilised by two different sperm cells. Their genetic code is like any other siblings – they share 50% of their DNA. Their blood type may be different.

Studies show that fraternal twins do run in the family through the female, who may have a genetic predisposition to release more than one egg. However, there is no evidence to the myth that twins skip a generation.

Your likelihood of having fraternal twins is determined by genetics, race, age and children previously born. For instance, non-identical twins are more common in black populations, if you have been pregnant several times before, in women over 30 and if you have had fertility / IVF treatment.

Breastfeeding twins is no different in principle to breastfeeding a single baby. The important thing is to get support from a breastfeeding counsellor if possible and make sure the positioning is right for you and your babies.

Whether you have a vaginal delivery or a Caesarean section depends on which way round the first baby is lying. In most twin pregnancies. both babies are delivered head-first. although breech (bottom-first) babies are more common than in single pregnancies.

Stride Rite: With Your Child For Every Step #HolidayGiftGuide