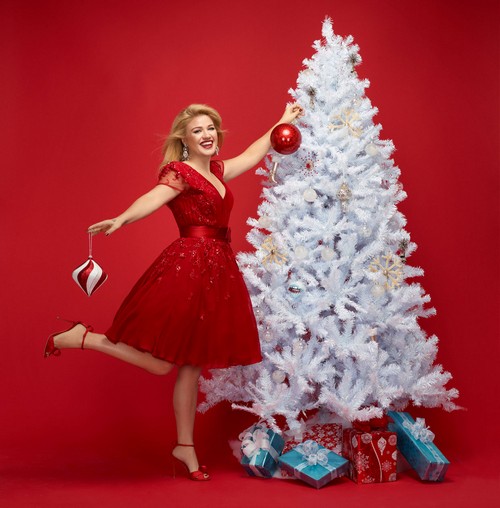 What is that myth again? That morning sickness only affects that part of the day in the A.M and magically disappears as soon as the A changes for a P? Yeah, Kelly Clarkson is not a very big believer… In her case it might be more like pregnancy sickness. Straightforward, simple yet very accurate, Clarkson clarified the matter on Nov. 26 The TODAY show:

“Nope,” Clarkson said when Savannah Guthrie asked the singer if she was feeling any better. “I don’t know why they call it morning sickness. That’s my big joke right now because it’s all day and all night. I am super-excited about being pregnant, though. I’m just looking forward to the second trimester . . . they say it’s better.”

Good to see that kind of bold enthusiasm on the former American Idol winner, the very same kind of excitement she exuded when she first announced her pregnancy on a Nov. 19 Tweet: “Brandon and I are so excited!” she shared, talking about husband Brandon Blackstock. “Best early Christmas present ever.”

How much better could her Christmas get? After marrying her husband only last month, she is now blessed with a new living thing which surely seems to be exactly what the hit-maker needed in her life right at this very moment. While on the show, Clarkson also spoke about one of the biggest superstitions of moms and parents in general: The waiting threshold before the big annunciation.

“We were trying to wait until the end of my first trimester because you’re supposed to, I guess, because you’re less likely to have a miscarriage,” said the 31 year-old singer. “But everybody kept talking about it and I had to cancel something because I’ve been so ill. I didn’t want people to think I was canceling because I’m lazy or something, so we just told people.”

Her pregnancy might be recent but Clarkson wasn’t leaving the TODAY show unscathed.

“Do you know something we don’t?” asked an emboldened Guthrie. “No, I’m way too early. I’m way too early to know,” replied Clarkson. “Scientifically, I guess they say — this is going to be too much information — they say if it’s later after you ovulate I guess girl sperm lasts longer than boy sperm — I don’t know if that’s true, my doctor told me that — and I guess mine was late. So there is a scientific reason why I think I’m having a girl.” But Guthrie wasn’t going to let her off the leash so fast.  “Okay, so it’s not just a gut feeling?” Guthrie continued her assault. “Well, it’s a gut feeling, too, because she’s killing me,” exclaimed the newlywed. “And of course it’s a girl, right, causing the trouble. So, it’s gotta be a girl.”

So what do you think people, will Clarkson’s baby turn out to be a baby girl? Is the science she evoked accurate most of the time? Do you personally believe in such science or do you consider it more like “science”? Don’t be shy to let us know what you down in the comments section!