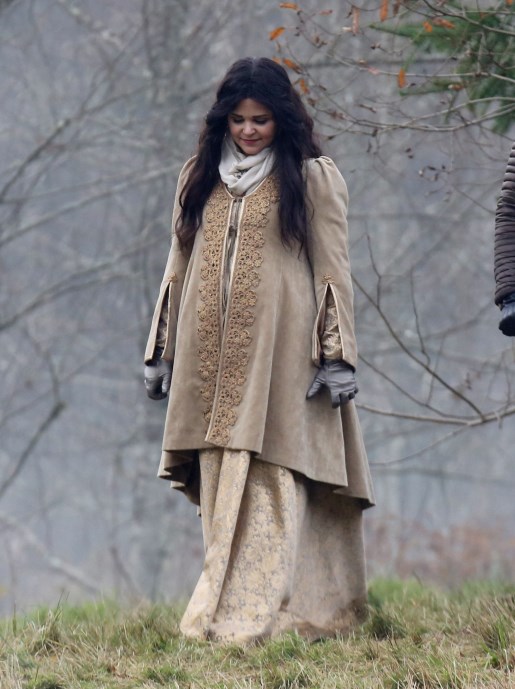 You know that if the first glimpse you get of someone’s baby bump happens to be on set of the show or movie they’re currently starring in that the person in question leads a pretty private life. That surely seems to be the case with Once Upon A Time actress Ginnifer Goodwin whose baby bump made its first appearance to the wider public while she was on set for the ABC series.

We see the 35 year-old star dressed in her usual garb from another time – full under-gown to go with the embroidered over-coat, old-school gloves as well as her black-haired wig. The real Ginnifer looks like a complete stranger next to her enacted character of Snow White.

The Memphis-born Jewish actress has been engaged to fellow cast-mate Josh Dallas, who portrays the Fictional-realm character of Prince Charming on the hit series, since the fall of 2011. Shortly after their October 9, 2013 engagement the couple broke the big news, as Ginnifer‘s pregnancy was announced on November 20. Her previous 2-year engagement to actor Joey Kern was terminated by mutual consent in May of 2011.

The Big Love actress, who played Margene Heffman on the hit HBO series, was forced to unwontedly give up her vegan lifestyle after she started suffering from health issues which she never felt comfortable divulging to the public.

“I’m always learning and growing and changing and there were some boring health issues, and so I did actually have to work some animal products back into my diet.” she confessed on the Jimmy Kimmel Show.