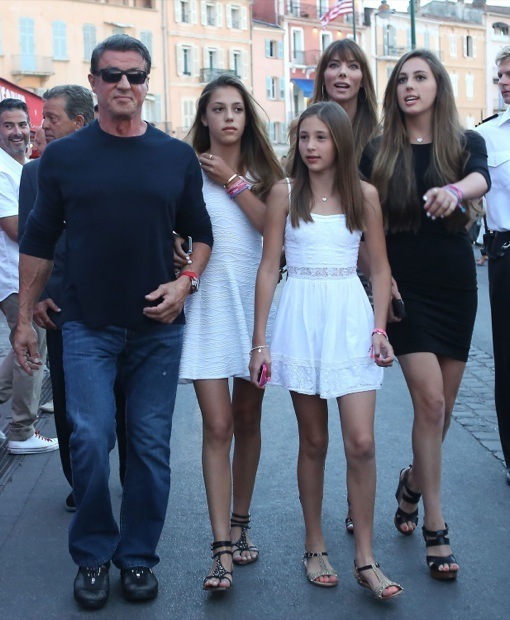 Sylvester Stallone along with his wife Jennifer Flavin and daughters Sophia, Sistine and Scarlet enjoyed a day in St Tropez, France on Saturday (August 3).

The Expendables actor was dressed in a blue sweater, jeans and runners while walking the beautiful streets of the city. Sophia and Scarlet wore matching white dresses while Sistine matched her mom in a dark dress.

Stallone will be staring alongside Arnold Schwarzenegger in the new action comedy the Escape Plan.

The two actions  have wanted to make a film together for almost 40 years.

“They would bring us things where we would dress up as girls and there were bickering neighbors and we’d have arguing pets. I go, `This is not working,'” Stallone said. “I said, `Why don’t we be two creepy inmates when we are 20 years past our prime?’ There’s a good idea. And that’s where we are. But it turned out great actually. It’s fantastic. We found a new prime.”

Escape Plan centers on two aging prison-escape artists who are locked away in what is called the world’s most secure prison.

The movie hits theatres this October.