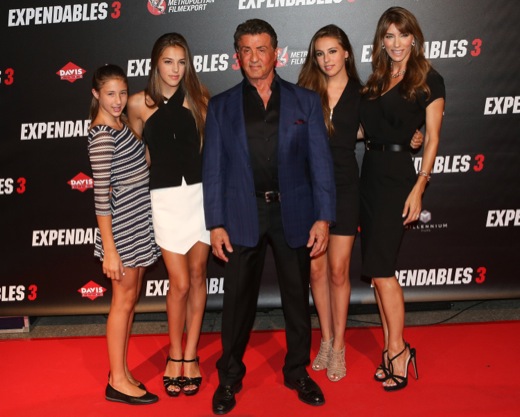 Sylvester Stallone, his wife Jennifer Flavin and their children Scarlet, Sistine, and Sophia attended The Expendables 3 premiere at the UGC Normandie in Paris, France on Thursday (August 7).

The Expendables actor who wore a navy jacket with a black dress shirt and pants looked like a proud dad while posing for pictures with his family. The girls looked to be having fun as the press screamed to take their pictures.

Stallone recently admitted that starring in action films is getting harder.

“Yeah, it gets harder. You get hurt a lot more and you have a tough time getting out of bed the next day,” he told the Mirror. “I’ve had my share of broken bones and torn tendons, and my body has been black and blue. But you tell yourself that this is one of the best jobs anyone could ever ask for.”