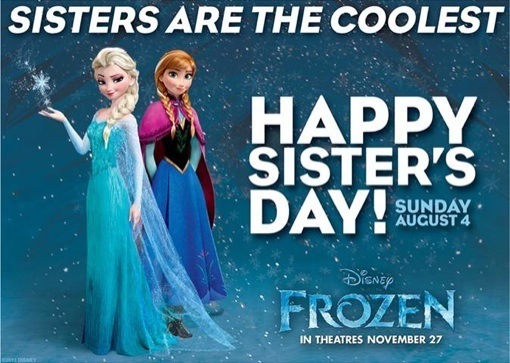 Did you know it’s Sister’s Day today? Today, is the day to call your sister up and thank her for just being her. Thank her for the good and even the not so good things sisters do to one another growing up.

While on the topic of sisters, let me introduce you to coolest sister duo to hit theatres. Sisters, Anna and Elsa from Frozen, an upcoming movie from Walt Disney Animation Studios.

Anna is voiced by none other than new mom, Kristen Bell. She is mom to 3-month-old daughter Lincoln.

A fearless optimist, Anna sets off on an epic journey with rugged mountain man Kristoff (voice of Jonathan Groff) and his loyal reindeer Sven—to find her sister Elsa (voice of Idina Menzel), whose icy powers have trapped the kingdom of Arendelle in eternal winter. Anna and Kristoff must battle the elements to save the kingdom.

This animated movie excites me because the characters resemble those of Tangled. Tangled is one of my favorite animated movies of all time. I’ve watched it twice and no not because of Ava. She was only a baby when it came out!

I’m hoping I will enjoy Frozen just as much. Especially, now that Ava and I can both watch the movie!

Jessica Alba Takes Her Two Mini Me’s to a Party