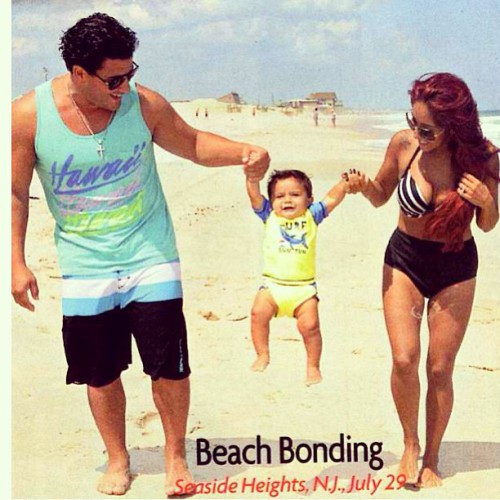 Nicole ‘Snooki’ Polizzi shared a cute summer shot of herself enjoying a beach day with fiancé Jionni LaValle and their 11-month-old son Lorenzo via Instagram.

“My family,” the Jersey Shore star  captioned the photo of them at the beach in Seaside Heights, New Jersey.

Snooki and her BFF JWoww are gearing up to start filming their Jersey Shore spinoff reality show entitled,  Snooki and JWoww.

They plan to film in Pelican Island near Seaside Heights, but  the township is attempting to pass an ordinance that would require a permit to film in advance of the show’s production.

“We don’t even have time for this nonsense,” Berkeley Township Council President James Byrnes told the New Jersey Star-Ledger. “We don’t need another distraction right now.”

What do you think? Should Snooki and Jwoww be allowed to film where they want?